From Eye On The UN (reposted with permission)


Obama’s U.N. ‘Engagement’ Swindle
It doesn’t speak well for our foreign policy when the administration
has to fabricate supposed successes.
This article by Anne Bayefsky appears today on National Review Online.

As gross human-rights violations continue to plague much of our planet, the U.N.’s lead human-rights body, the Human Rights Council, remains fixated on Israel, leaving the Obama administration in need of a strategy for justifying its policy of “engagement,” and particularly American membership in the HRC. The new strategy of choice? Misrepresentation. The State Department has posted on its website an account, photo and all, of HRC action on an egregious human-rights violation — action that didn’t happen.


Soon after he took office, President Obama decided the United States should join the HRC. On October 1, the last day of the HRC’s most recent session, the United States’ U.N. mission to Geneva issued a press release heralding the administration’s engagement approach. Ambassador Eileen Donahoe, who chaired the finance committee of National Women for Obama during the 2008 campaign, is quoted as declaring that the council has “made historic progress . . . in advancing the rights of human-rights defenders throughout the world.” But her sales pitch depends on a serious distortion of events.

By the time this “historic” session advancing human rights had ended, the council had spent the same amount of time on its agenda item devoted entirely to Israel-bashing as on its single agenda item on all the “human-rights situations that require the Council’s attention” anywhere else in the world. Tallying all the resolutions that the Council adopted targeting any of the 192 U.N. member states, there were two resolutions condemning Israel, one resolution on “assistance” to Somalia, one on “advisory services and technical assistance” to Cambodia, and one “congratulat[ing] the Government and the people of the Sudan for . . . the April 2010 elections.” Those were the widely criticized elections that handed President Bashir another term after 21 years in office, notwithstanding that he has been indicted for genocide by the International Criminal Court.

Justifying American membership on the council and the legitimization that U.S. membership brings is, therefore, a challenge. But few would have expected that the administration would attempt to meet that challenge by leading the American public to believe the council had held a meeting to respond to a terrible human-rights violation — when in fact no such meeting had taken place.

Since late July, gang rapes have been systematically carried out in the Democratic Republic of the Congo (DRC), and impunity for the rapists has been standard practice. The attackers are mostly members of rebel militias, but government troops have also been implicated. Victims have included baby boys and women aged 110. U.N. peacekeepers stationed just 20 miles away, and warned of impending violence, did nothing to stop 240 rapes over a four-day period in early August. Given what we know about the council’s routine in the case of Israel, it could have held a special session, or held an urgent debate during September’s regular session, or started an investigation, or adopted a resolution condemning the atrocities and demanding that the perpetrators be prosecuted.

The council did none of the above. On September 27, two months after the attacks began, it held an “informal dialogue” on the DRC during a lunch hour. The meeting was not listed in the U.N. bulletin that is supposed to provide notice of informal meetings. The council president gave just 15 minutes’ advance notification of the event, which was deliberately organized to take place outside the council chamber. This meant there was no webcasting service, no recording of the event, and no U.N. press release summarizing it. The DRC minister on human rights and justice, who had originally indicated he would come, did not show up; thus the so-called dialogue was held without the representative of the state involved. To put it in perspective, a lunch meeting on systematic mass rapes had less status than the lunch meeting organized a few weeks earlier with plenty of notice in the U.N. bulletin on “Non-State Service Provision in Water and Sanitation.”

But here is how the Obama administration scriptwriters rewrote it. The U.S. mission to Geneva issued a press release with the title: “United States Welcomes Engagement by Human Rights Council on Abuses in DRC.” The press release included a large file photo of a full meeting in the council chamber — though the “informal dialogue” had deliberately not been scheduled in that chamber. 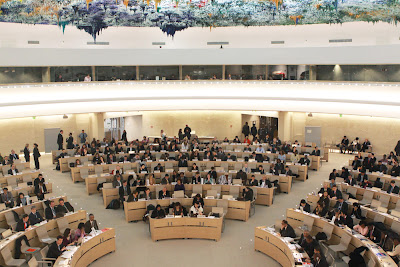 The administration’s press release quotes Ambassador Donahoe as gushing: “Today’s meeting demonstrated that the Council can react to events in real time.” A few days later, Donahoe wrapped up the council session with the following praise: “I also recognize the forward movement made on other important human-rights issues this session. . . . I welcome the council’s engagement on the issue of the mass rapes in the Democratic Republic of the Congo. This showed the council’s ability to react to real events in real time and to contribute its voice to this important issue.”

Not only was two months later not “real time,” but the council itself had not reacted at all. By comparison, in response to the Koran burning in Florida that was called off, the council issued an agreed statement demanding “practical steps to end such intolerance.” Agreement on practical steps to end such intolerance as gang-raping the DRC’s women and children, however, was beyond it.

The Obama administration is pouring significant energy into making U.S. membership on the Human Rights Council a shining example of the benefits of engagement. Back in September, Donahoe penned a New York Times op-ed entitled “Fighting the Good Fight,” in which she said: “I have been very pleased by several developments that confirm U.S. participation was the correct decision.” Three weeks later she was heralding “historic progress.” She pointed to the creation of a new post of U.N. investigator on the theme of freedom of association and assembly and a new working group to monitor “discrimination against women in law and practice.” Attempts by U.N. thematic human-rights investigators to gain entry and report on the world’s worst states, however, routinely fail. And whatever they find, they can expect the same wall of silence with which the council greeted the rape victims of the DRC. Unless, of course, they target Israel.

What the Obama administration is really communicating is that demonizing Israelis and granting exception clauses for African women and children can be offset by human-rights “progress” on other fronts. Little wonder that its tall tales justifying American membership on the Human Rights Council aren’t convincing.