The caption under the picture in Palestine Today could not be clearer: Settlers storm the place of 'Joseph' in Nablus

But pictures speak louder than words. 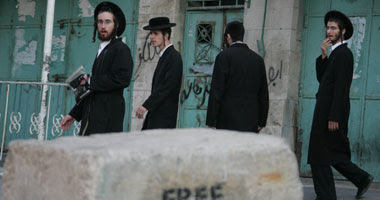 Elder of Ziyon has more on "Settlers storm Tomb of Joseph":


Once again, a group of Jews went late at night to pray at the Tomb of Joseph near Shechem (Nablus,) and the Arabic media freaks.

This time it is Palestine Today saying they are "settlers" who "stormed the shrine" and "raided" the area, which is supposed to be accessible to Jews under existing agreements.

The Palestinian press has been known to take yellow journalism to whole new levels--but unlike William Randolph Hearst, this about more than just selling more papers; it is about inciting hatred and encouraging world condemnation.

And it works--because the MSM takes this stuff at face value.

Back in 1996, Charles Krauthammer wrote about A Desecration Of The Truth:


As fighting raged in the streets of the West Bank and Gaza late last month, Israel's opening of the now infamous Jerusalem tunnel was denounced from Turtle Bay to Timbuktu as a desecration of the Islamic holy sites in Jerusalem. It took nearly a week and fully 70 dead before the truth began to trickle out: the charge was a lie.

This tunnel, which is in fact part of an archaeological excavation, does not impinge on any Islamic holy places. It does not threaten any mosques. The only religious site it does touch is Judaism's holiest shrine, the Western Wall. The excavation had been open for eight years. It needed another gate to allow more visitors.

Yet for days at the beginning of the crisis, the American press echoed the falsehood. The Wall Street Journal, front page, reported Palestinian violence sparked by a "tunnel on Jerusalem's Temple Mount." It isn't. ABC News' Peter Jennings parroted the charge: "Muslims say the tunnel cuts under their compound and call it a crime against Islam." It doesn't and it isn't. The Washington Post explained that "it should come as no surprise that violent passions were aroused by Israel's tampering with the ground beneath the Dome of the Rock and al-Aqsa mosque." No ground beneath either shrine was touched (as noted, ironically enough, on the same day on the Post's op-ed page by archaeological scholar Hershel Shanks).

What happened? The Western media were simply taken in by a lie--an easily provable lie--put out by the P.L.O. and the Arab League. At Arafat's urging, the League issued within 48 hours of the tunnel's opening a declaration calling the tunnel "part of an Israeli Zionist plot to destroy the Aqsa mosque [and] set up the Temple of Solomon."

This charge would be hilarious if it weren't so grievous. There are about as many Israelis who want to tear down Aqsa and build the Temple as there are Americans who believe they've flown on UFOS. Secular Jews view the idea of rebuilding the Temple as loony; religious Jews, as sacrilegious. (Only God can rebuild the Temple.) Yet the Palestinian Authority echoed this incendiary libel, calling on Palestinians "to express their anger" over this "aggression on al-Aqsa mosque" and "desecration of the holy places."

Nearly a week into the crisis, some American media were still broadcasting the charge. National Public Radio, for example, reported on Sept. 30 that Palestinians "claim the project threatens the stability of al-Aqsa mosque."

Claim? The Soviets claimed to have invented baseball; Cuba, the telephone. Some people claim to have seen Elvis, recently. Arafat claims Jesus was a Palestinian. Are all claims to be reported at face value?

The Arab claim about the tunnel was, in fact, a big lie: modern propaganda with medieval resonance. In medieval times, massacres against Jews were often carried out as vengeance for some alleged Jewish desecration of Christianity. How would NPR have covered the blood-libel-inspired massacre of the Jews of Munich in 1286? "Leaders of the massacre claim that the Jews had killed Christian boys and used their blood for religious rituals"? For balance, I suppose, NPR would have added, "The Jews deny this."

And yet, during the "tunnel" riots of two weeks ago, there were incidents of murder and sacrilege. One occurred in Nablus, an Arab town under P.L.O. control. There is in Nablus a Jewish religious site, Joseph's Tomb. Under the P.L.O.-Israeli peace accords, it remained a tiny enclave peopled by devout Jews and, for protection, a few Israeli soldiers. On Sept. 26, it was attacked by a Palestinian mob throwing firebombs. Six Israelis were killed. Many prayer books were burned.

This is the Middle Eastern equivalent of a mob of whites torching a black church, killing parishioners and burning its holy objects. Yet, while the tunnel received enormous coverage complete with diagrams, the desecration at Joseph's Tomb, if reported at all, merited at most a few sentences. And a similar Palestinian attempt to firebomb Judaism's third holiest shrine, Rachel's Tomb in Bethlehem, received in the major American press no mention at all, save one in the New York Times--in a picture caption on page 12!

Has there been a word of condemnation from anyone--outside official Israel and the occasional columnist--for the spreading of the Aqsa blood libel? Indeed, when the tunnel pretext evaporated, the press simply moved on. Retraction? Apology? Hardly. Instead, the press shifted seamlessly to a new explanation--justification--of Palestinian violence: it was a product of "frustration." What kind of rationale is that for murder? Timothy McVeigh was frustrated too.
Anti-Israel bias in Western coverage of the Middle East has a long, ignoble history. Rarely, however, does it take so stark a form as a reported desecration that is totally false and real desecrations that are barely reported.

By comparison, this article in Palestine Today is nearly insignificant and is unlikely to create any incident. But it is a reminder of the larger problem of the Arab media, and of the Western media that--and not only for reasons of gullibility--participates in the demonization and delegitimization of Israel.