West Bank Continues To Celebrate The Murder Of Israelis

Both parties are taking some steps to help create an atmosphere that is conducive to successful talks, including President Abbas’ statement that he will work against incitement of any sort...
Statement on Special Envoy George Mitchell's Trip, May 9, 2010

And I say in front of you, Mr. President, that we have nothing to do with incitement against Israel, and we’re not doing that. What we care about is to live in coexistence with Israel, in order to bring about the independent Palestinian state that will live side by side with Israel in peace and stability.
Abbas, Remarks by President Obama and President Abbas of the Palestinian Authority after Meeting, June 9, 2010

Now, let's jump ahead to this week, as Terrorists who killed 6 lauded as "heroes" in clip shown seven times in three days on PA TV:

A clip broadcast seven times in three days on PA TV labeled Palestinian terrorists as "heroes" for having murdered six Israelis in two terror attacks. PA TV showed the clip to coincide with the anniversary celebrations of the Palestinian Arab Front (formerly Arab Liberation Front), the organization that carried out the attacks in 1975 and 1980.

The attack on Kfar YuvalOn June 15, 1975, terrorists from the Arab Liberation Front penetrated the Israeli village Kfar Yuval near the Lebanese border. Four terrorists seized control of one of the homes and held its inhabitants hostage. Three Israelis were killed. 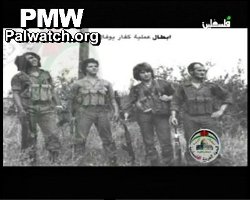 The attack on Misgav AmOn April 7, 1980, five terrorists from the Arab Liberation Front took control of the children's house in Kibbutz Misgav Am in northern Israel, holding the children hostage. They killed two adults and one child before they were subdued by the Israeli army. 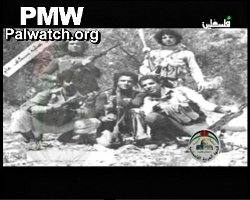 Thanks, Abbas.
Technorati Tag: Kibbutz Misgav Am and Kfar Yuval and Abbas.