Nasrallah Lied To Ahmadinejad About Rifle He Gave As A Gift 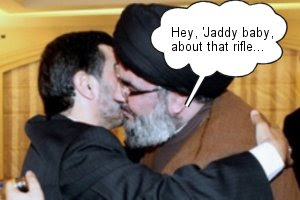 It's one thing for Yedioth Ahronoth to be reporting this, but I'm surprised that Lebanese papers are picking up on how Nasrallah Deceived Ahmadinejad About The Gun:

Hezbollah said its leader has given Iranian President Mahmoud Ahmadinejad an Israeli rifle captured from an Israeli soldier during the 2006 war with Israel as a gift to cap off his two-day visit to Lebanon.

The daily said the gun was a type of weapon that has not been used by the Israeli military since the early 1970s, meaning it could not have been taken from soldiers during the 2006 war.

The paper quoted a military spokesperson as saying the weapon was “most likely” an FNFAL 7.62 rifle that went out of use in 1974.

The 2006 war resulted in the killing of over 1200 Lebanese mostly civilians and 160 Israelis mainly military. Over 1 million mostly Shiites became homeless and over 120, 000 housing units were destroyed . But the end of the 34 day war Hezbollah chief declared a “divine victory“

Judging by that last, tongue-in-cheek paragraph, I imagine that the paper--like many Lebanese--are feeling somewhat fed up with Hezbollah these days. And Ahmadinejad's visit to Lebanon was just the icing on the cake.

I suppose that after lying to Ahmadinejad, Nasrallah will be back in hiding right about now.

Lebanese are a diverse population with a rather permissive state (what they call "freedom of speech"). There are die-hard Hezbollah supporters, and there are big chunks of people who are very attuned to the western view of thing - even the Israeli view in some extreme cases. And of course, those who are in between. People try to get along. Call it tongue in cheek if you want - I see it as "trying to stay impartial". Humor and absurdity can be a tool of coexistence and tolerance.