Putting their victory over Israel for largest bowl of hummus, Lebanon has found other worlds to conquer-- 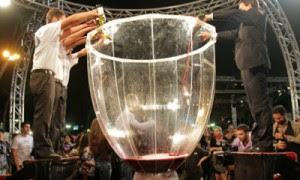 That's right: Lebanon now holds the record for the biggest glass of wine:


Lebanon has claimed the record for the world’s biggest wine glass, which can hold an incredible one hundred bottles.

The giant vessel was unveiled at a wine festival in Beirut and officially declared a champion by Guinness Book of World Records.

Measuring 1.51 metres in height and 1.46 metres at its widest point, it holds enough to give anyone a hangover.

Lebanon has really been on a roll:


Lebanon has been on a drive to celebrate its culinary expertise recently, also producing the world’s biggest bowl of hummus and the biggest servings of Kibbeh and Tabbouleh.

Apparently no one has yet noticed that Lebanon also holds the record for largest Iranian territory.

UPDATE: I haven't heard of it, but is there a Guiness record for the country with the most Guiness records? It does seem that Lebanon is aiming for that: Lebanon’s Red Cross creates world’s largest handprint painting

Apparently no one has yet noticed that Lebanon also holds the record for largest Iranian territory.

That was cheezy (pun intended).

Well not for long. With Karzi in Afghanistan receiving bags of cash from Tehran and the border between Iraq and Iran disintegrating, Iran is clearly reaching out.

It would be nice to taste a glass from the big glass of wine...or even swim in it :)
I think it's smart to make such promotions for global awareness of a product.

LN: Unfortunately, Iran can afford to reach out with impunity, considering current US policy. Considering all that it has gotten away with during these past 2 years, imagine what it will do with 2 years to go!

Daniel: It's good for Lebanon in general, a bright spot amidst all the turbulence.