Now Bostom will be coming out with a new book in September: Sharia versus Freedom–The Legacy of Islamic Totalitarianism, with a foreward by Andrew C. McCarthy.

The underlying theme of Bostom's book, Sharia versus Freedom is the incompatibility of Sharia with universal human rights:

Author Andrew G. Bostom expands upon his two previous groundbreaking compendia, The Legacy of Jihad, and The Legacy of Islamic Antisemitism, with this collection of his own recent essays on the Sharia—Islamic law. The book elucidates, unapologetically, the Sharia’s defining Islamic religious principles, and resultant consequences of its application across space and time, focusing upon contemporary illustrations. A wealth of unambiguous evidence is marshaled, distilled, and analyzed, including: objective, erudite studies of the Sharia by leading scholars of Islam; the acknowledgment of Sharia’s global “resurgence,” even by contemporary academic apologists for Islam, combined with an abundance of recent polling data from Muslim nations, and Muslim immigrant communities in the West confirming the ongoing, widespread adherence to the Sharia’s tenets; the plaintive warnings and admonitions of contemporary Muslim intellectuals—freethinkers and believers, alike—about the incompatibility of Sharia with modern, Western-derived conceptions of universal human rights; and the overt promulgation of traditional, Sharia-based Muslim legal systems as an integrated whole (i.e., extending well beyond mere “family law aspects” of the Sharia), by authoritative, mainstream international and North American Islamic religio-political organizations.

Here is the cover of the Sharia Versus Freedom, with description: 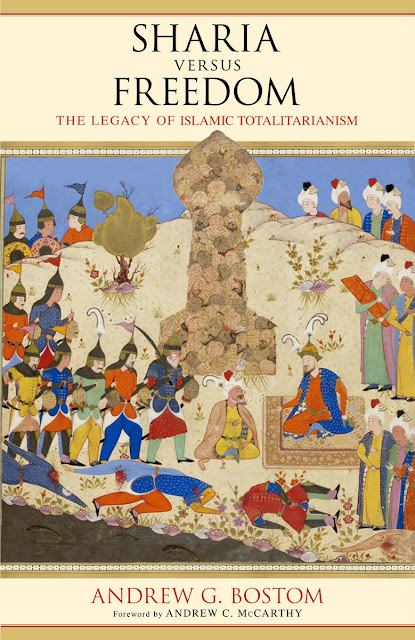 The cover art reproduces a miniature painting from a sixteenth century manuscript of the Zafarnama by Sharaf al-Din Ali-Yazdi. The image was housed in the British Library (shelfmark/page: Or. 1359, f.389v), and originally published/produced in Shiraz, Iran, 1552. It depicts soldiers filing before the Islamized Mongol conqueror Amir Timur-i-lang, or “Tamerlane,”  holding heads of their decapitated enemies which they used to build a tower shaped like the minaret of a mosque, in Baghdad (1401).