Abbas Has Reached A Milestone In Threatened Resignations


Mahmoud Abbas threatened to dismantle PA if Israel continues pushing E1 development. The man who just got “statehood” from the UN is now quoted in media reports saying:


Speaking at the opening session of the Fatah Advisory Council in Ramallah, Xinhua news agency reported, Abbas said that he is considering asking Israel to resume full control of the West Bank, saying it is impossible to act as a leader without being granted power.

And who knows when Abbas will threaten to resign next... 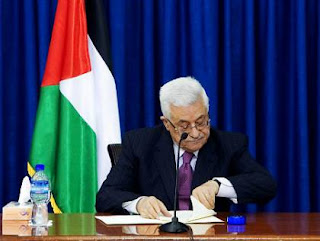 Keep in mind that next month will be Abbas's 4th anniversary.

That's right: January 15, 2013 will mark 4 years since Abbas's term as president ended, so one would think that this game of "resigning" would be a bit old.

But no one seems to mind that Abbas has held onto the position of president in violation of the "Palestinian" constitution -- which  actually makes sense, since the world's governments had no problem violating the Oslo accords in order to upgrade the "Palestinian" status at the UN.

How many times do you think Abbas will threaten to resign in 2012?

Email ThisBlogThis!Share to TwitterShare to FacebookShare to Pinterest
Labels: Abbas