Today is the first day of Chanukah -- we lit our first candle last night.  On this eight-day holiday we commemorate both a miracle from the Almighty -- a miracle of light that provided hope to the people, and a military victory that secured the people's right to live fully as Jews. 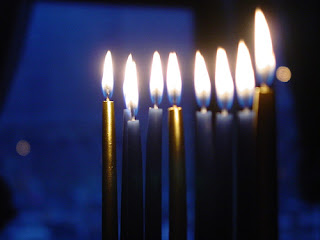 And so, I want to begin by wishing all a Chanukah Sameach -- a joyous holiday.  And by praying that we will both receive light from Above, and find within ourselves the strength we need to persevere with determination.
~~~~~~~~~~

I am delighted by the response from many readers to the posting I did last providing background to Israel's legal and historical rights to the land.  What I want to do here is inform you about a number of other sources of information:
~~~~~~~~~~

Last week PM Netanyahu was in Europe, and stopped in Germany for a talk with German Chancellor Angela Merkel.  At the end of their meeting they came out smiling, and saying they had "agreed to disagree" on the settlement issue.  While he managed to be friendly, he had not backed down.
Before meeting with Merkel, Netanyahu gave a forthright interview to the newspaper Die Welt.


"...I would be disingenuous if I didn't tell you that I was disappointed, as were many people in Israel, by the German vote in the UN..."

Netanyahu allowed that Merkel believed that the vote would


"somehow advance peace, [but] in fact the opposite happened because in the aftermath of the UN resolution, we see that the Palestinian Authority under President Abbas is moving to unite with the Hamas terrorists.

"The resolution did not call for recognizing the Jewish state or ending the conflict with us or having security safeguards.  It has encouraged the Palestinians, actually, to toughen their position and not to enter negotiations.

"[In going to the UN] the Palestinians tore to shreds their commitments under the Oslo Accords.  [This was] somehow dismissed [while] our response, which is measured and certainly less than proportional, is blown sky high.

"That's neither fair nor judicious, because it doesn't bring peace closer.  It pushes it back.  It hardens the Palestinians' positions and it tells us something very, very disturbing.  It says there's no value to making agreements, for peace, because when the other side violates them, nobody will hold them accountable." (Emphasis added)

"In our history, including on the soil of Europe, we had a regular pattern. First the Jewish people were maligned, then they were attacked.  And the maligning, the vilification, served as the legitimization for the attacks that followed, and in many ways this is what is happening to the State of Israel.  It is vilified again and again, in public opinion, including in European public opinion, to prepare the attacks.  And people don't know the facts.

"...What is our great crime? What is it we're doing? We're building in the areas that will remain in a final peace settlement of Israel. What are we talking about? This is not some foreign land. This is the land in which the Jewish people have been for close to 4,000 years..."

Read: The Palestinians want a state without peace
I say "Right On!" to our prime minister for having said a good deal that needed to be said and almost never is.  Inside of Germany, he held the Europeans accountable for their historic abominations against the Jews, and linked this to mindless anti-Israel positions today.
~~~~~~~~~~
The only possible weakness in the position he took in Europe was that he still spoke as if there might be a peace process: "We're building in the areas that will remain in a final peace settlement of Israel."
He was not yet forthright enough to say the behavior of the Palestinian Arabs had rendered this vision moot.  I think that while he knows it is moot, and he knows that the land is ours, he also recognizes that he wouldn't be heard, he would be rejected out of hand, if he didn't embrace the possibility of seeking a negotiated peace when speaking in Europe.
See below for more.
~~~~~~~~~~
After all the talk, the rumors, the British declared late last week that they didn't see it as likely that there would be any sanctions against Israel because of decisions on building.
Standing strong is the way to go. Although, I will note, we still have to see what comes out of the meeting of the EU foreign ministers, slated to begin soon.
~~~~~~~~~~
As far as evidence that we're not headed towards "negotiations for peace," we need look no further than what happened in Gaza City yesterday, where a rally of hundreds of thousands was held to mark the 25th anniversary of the founding of Hamas.
Politburo head Khaled Mashaal came to Gaza -- for the first time ever -- for these celebrations, and addressed the crowd (emphasis added):

"Palestine from the river to the sea, from the north to the south, is our land and we will never give up one inch or any part of it.

"Jihad and armed resistance are the right and real way to liberate Palestine and restore our rights.  Liberating Palestine, all of Palestine, is the duty and the right and goal of all Arabs and Muslims."

~~~~~~~~~~
Yes, this is the same Hamas that very recently concluded a ceasefire with Israel -- however long that is going to last.
And this is the same Mashaal as the one who recently gave an interview with CNN's Christiana Amanpour, in which he said that Hamas accepted a Palestinian state within the pre-'67 lines.
I've written many times -- most recently last week -- about the duplicity of Muslim Arabs, their propensity for falsehoods when it serves their larger goals.  And here you have it.  Mashaal's statements for CNN were intended for a Western audience.  What he said yesterday was in Arabic, meant for his own people.
~~~~~~~~~~
What is perhaps most significant about this anniversary rally is that members of Fatah were invited to participate along with Hamas in the "celebrations," and Fatah officials were pleased to do so.  Talk of "reconciliation' is reinvigorated, with Fatah official Azzam al-Ahmed saying that Fatah was waiting for the celebrations to end so that unity talks could be launched.
It does not matter if there truly is "reconciliation." The mere fact of the willingness of Abbas to pursue this is all the evidence that is needed of his intentions.
Increased violence in Judea and Samaria seems fairly inevitable.  Well, actually there already is increased violence there on a relatively low scale -- stoning of cars, etc.  What I am looking at is the distinct possibility of something major.
~~~~~~~~~~
Not only is Netanyahu keenly aware of this turn of events, at today's Cabinet meeting he spoke out (emphasis added):

"In the last 24 hours we glimpsed, once again, the true face of our enemies. They have no intention to compromise with us, they want to destroy our country, and obviously they will fail.

Netanyahu said that he was prepared to stand against international pressure, and that he would protect Israel's interests.

"We want true peace with our neighbors,  But we don't shut our eyes. We don't bury our heads in the sand....

"I am always amazed at the delusions of those who are willing to continue this process and call it peace."

Ah! he said it. Not in Europe, but at home, he said it.
I feel a distinct shift in our prime minister's tone (I still pray, let it last).  Not so long ago, he would have been nattering on about holding out his hand in peace to Abbas, if only he would come to the negotiating table instead of uniting with Hamas.
Not now.  Baruch Hashem.
~~~~~~~~~~
© Arlene Kushner. This material is produced by Arlene Kushner, functioning as an independent journalist. Permission is granted for it to be reproduced only with proper attribution.
If it is reproduced and emphasis is added, the fact that it has been added must be noted.

-----
If you found this post interesting or informative, please

Email ThisBlogThis!Share to TwitterShare to FacebookShare to Pinterest
Labels: The Jewish Right To Israel