Motzei Shabbat (After Shabbat)
Among the harshest of realities is the cold blooded murder of young children.  And so I begin tonight by offering my heartfelt condolences to America, and most especially the Americans of Newtown CT affected by the school massacre there yesterday.  There are no adequate words for such happenings.
~~~~~~~~~~
In truth, as I look about me, I see a whole array of harsh realities.  There is no choice but to address them.
In my last posting, I alluded to President Obama's announcement that he would be recognizing the Syrian Opposition Coalition, because it was

At that point I commented that: the coalition Obama will recognize may be "inclusive," but that means it includes radical rebel forces, who will do all in their power to fight their way into positions of control.
But now I have to offer a correction, for my assessment, while on the right track, was a bit of an understatement.  Radical forces are not simply "included" in the coalition. And they will not have to "fight their way to control."

The leader of the Coalition is Ahmed Mouaz al-Khatib, former imam of the Umayyad Mosque in Damascus, and a close associate of the Damascus branch of the Muslim Brotherhood.
The Coalition, formed in Qatar, is the civilian arm of the rebel movement of Syria.  Associated with it is a new military council.  According to a Reuters report, "the Muslim Brotherhood and their allies account for about two thirds of the 263 men who met in Antalya [Turkey] and formed the new body."
~~~~~~~~~~
The above information is from Jonathan Spyer -- senior research fellow at the Global Research in International Affairs Center.
We might wonder precisely what is going on -- although we should not be enormously surprised given Obama's promotion of the Brotherhood in Egypt.   Explains Spyer (emphasis added):

"All of these moves indicate that a coherent US and western policy toward the rebel side in the Syrian civil war is now emerging. This policy is in line with the Obama Administration’s broader regional orientation, and meets with the approval of key EU governments. It is also the preferred direction of Turkey and Qatar, the two countries who led the international response to the Syrian rebellion during the long period that the west preferred not to get directly involved.

"The intention is to align with and strengthen Muslim Brotherhood-associated elements, while painting Salafi forces as the sole real Islamist danger. At the same time, secular forces are ignored or brushed aside."

"...So the emergence of the Syrian National Coalition and the associated Joint Military Council means that the West and its regional Sunni allies are now backing a Muslim Brotherhood-dominated coalition as the preferred replacement for the Assad regime.

"The al-Qaida-linked Jabhat al-Nusra organization, now designated a terror organization by the US, is a powerful jihadi force on the ground.

"The Western desire to declare this group off limits is entirely understandable. But the attempt to build it up as a kind of bogeyman to be contrasted with so-call 'moderate' Islamist groups has little basis in reality. The difference between the Salafis and the Muslim Brotherhood-affiliated groups is one of degree, not of kind.

"Exemplifying this, the US designation has led to a furious response across the board among the Syrian rebels. Twenty-nine rebel groups have now issued a statement saying 'we are all Jabhat al-Nusra.'

"The focus on Jabhat al-Nusra should not obscure the fact that the better-organized, non-Salafi, home-grown Muslim Brotherhood elements that the US is backing are no less anti-Western and no less anti-Jewish.

"...The result is that the force now facing the retreating Assed regime is split between differing  brands of Sunni Arab Islamism...all holding fast to fundamentally anti-Western ideologies.

"Given the level of life that has been lost in Syria, and the presence of chemical and biological  warfare programs now in the vicinity of Islamist terror groups, it does not seem hyperbolic to recall a stanza from Percy Shelley's famous poem, 'The Revolt of Islam: Their complicating lines did steep the orient sun in shadow...and all around, darkness more dread than night was poured upon the ground..'"

Read: The Revolt of Islam in Syria
~~~~~~~~~~
According to Friday's JPost, a senior military source has said that Syrian rebels have achieved "relative control" over the border with Israel.
"This doesn't change our plans. We've been ready for this development for a long time," the source said.
Elaborated the Post:

"The IDF is closely monitoring events across Syria...

"The risk of Al-Qaeda-affiliated groups coming into possession of strategic weapons in Syria appears to be equal to that of Hezbollah attempting to seize them.

"Military intelligence is concerned not just by chemical weapons, but by the risk of long-range missiles and other powerful weapons passing into rebels hands...

IDF Northern Command policy is to permit no spill over into the Golan Heights from the fighting in Syria.

Read: Syrian rebels in control of border area with Israel
~~~~~~~~~~
Hevron has been a hot spot for a while now, with a growing number of violent Arab incidents.  Now a group that is calling itself the "National Union Battalions" -- which it claims is to be jointly headed by members of Hamas, Fatah, Islamic Jihad and the Popular Front or the Liberation of Palestine -- has released a video that declares:


"This is the beginning of a third Palestinian intifada, which is erupting from the heart of Hevron and will spread to all of Palestine."

Their talk is tough, their demands many.  As they say they want to "recover Palestine from the river to the sea," their demand that Israel withdraw from all "Palestinian lands" sounds like a demand that we be gone completely.  I have no idea who this group actually represents, or how great their influence is or is likely to become.  But this does seem a bit of handwriting on the wall in terms of what we have to contend with.
~~~~~~~~~~
But enough of harsh realities on this, the last night of Chanukah.  The lessons of the holiday offer another sort of reality.  And in spite of all that I've written above, I still bask in the glow of having lit my candles with grandchildren tonight.  All that light. All that singing. 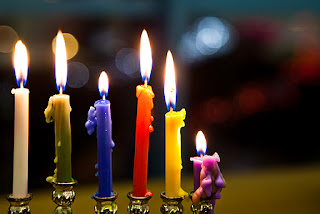 Credit: jpg.magazine
And so let me end this post with a favorite Chanukah video of mine -- the flashmob from Nefesh B'Nefesh, filmed three years ago on Ben Yehuda Street in the heart of Jerusalem.
And then a video of the Chanukah song Maoz Tzur that I've just found.  I rather like the formatted effect and the candle light in this one.

Or you may prefer this medley of traditional and not so traditional Chanukah songs -- done acapella with harmonies by the Yeshiva University Maccabeats.

Email ThisBlogThis!Share to TwitterShare to FacebookShare to Pinterest
Labels: Obama, Syria, The Disaster of Obama's Policy In The Middle East