I suppose it should not be all that surprising that Iran Blames Israel for Newtown Shooting:


According to PressTV, Iran’s state-run English language media outlet, Israeli death squads were responsible for last week’s shooting at Sandy Hook Elementary that took the lives of 20 children and a number of adults. You’re not misreading that.


The article fashions the wild ravings of Michael Harris, a former gubernatorial candidate from Arizona and present day neo-Nazi ally, into the narrative, invoking Lee Harvey Oswald and other points of conspiratorial fascination.

The reason Iran's racist ravings against Jews is not a surprise is that Iran tends to indulge in Jew hatred. Just take this classic example from 2005, where Iranian "analysts" denied the Holocaust while also claiming that Jews killed children for their blood 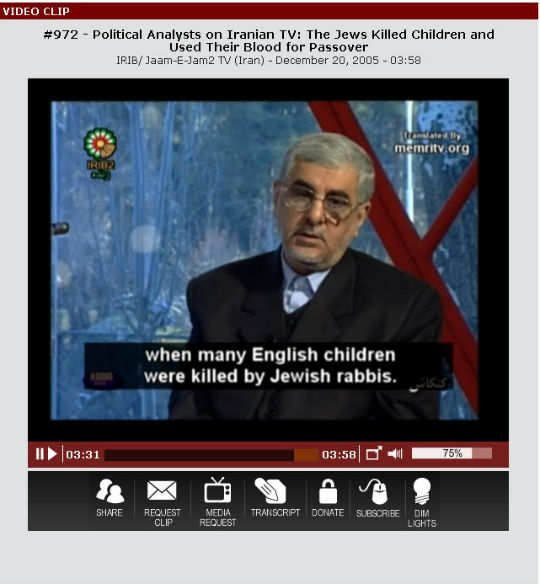 Here is a partial transcript:


Following are excerpts from a TV discussion with Iranian political analysts Dr. Hasan Hanizadeh and Dr. Ali-Reza Akbari, which aired on Jaam-e Jam 2 TV on December 20, 2005.

Ali-Reza Akbari: Historians and eye-witnesses, some of whom are still alive... There are still many people who saw with their own eyes what happened 70-80 years ago. These people are alive and are of sound mind. They still possess the analytical abilities they had back then. They are our witnesses, and they deny the existence of crematoria at a place called Auschwitz.

Perhaps the reason... In my opinion, the people who say that the phenomenon of burning Jews on German soil during the World War II crisis is similar to a holocaust do so as a result of propaganda and due to psychological reasons.

In any event, a case of burning people has been registered in history, when many human beings were burnt because of their beliefs. The people who were burnt then were, in fact, Christians. They were burnt by the people who ruled Yemen, who were Jews. This event took place 400 years before the advent of Islam in the Arabian Peninsula. Since then, the burning of human beings has been termed "holocaust."

Host: Were there six million Jews at all at that time, who could have been annihilated in the crematoria?

Hasan Hanizadeh: First of all, this figure is greatly exaggerated. The number of Jews in the world does not exceed 12 million. Only now, 57 years later, has it reached this figure. Clearly, at that time, considering the dispersion of the Jews, there could not have been six million Jews in Europe alone. In any event, the Zionist lobby and the Jewish Agency use this issue as a club with which they beat and extort the West.

Unfortunately, the West has forgotten two horrendous incidents, carried out by the Jews in 19th-century Europe - in Paris and London, to be precise. In 1883, about 150 French children were murdered in a horrible way in the suburbs of Paris, before the Jewish Passover holiday. Later research showed that the Jews had killed them and taken their blood. This event caused riots in Paris back then, and the French government found itself under pressure.

With such a perverse mentality, it was obviously easy for the state-controlled Iranian press to update the classic blood libel and accuse Jews of killing little children in Newtown.

Which raises the question of why such an obviously backward government is treated as if it were worthy of respect -- instead of the disdain its Medieval hatred deserves.

And there will be 20% of the total readership of The Huffington Post who agree and who will comment to that effect on HP's moderated blog. Iranian insanity doesn't exist in a vacuum. It's fed by western 'progressive' insanity.

I don't know if it's fed by them, but I do know that Iran gets no significant blow back on this from the West -- not at the UN nor anywhere else.