Failing in Syria, Russia Intent Not To Lose Iran -- At Their Own Risk

I strongly urge that in breaking down the walls of Marxist fantasies you do not fall into the prison of the West and the Great Satan. I openly announce that the Islamic Republic of Iran, as the greatest and most powerful base of the Islamic world, can easily help fill up the ideological vacuum of your system.
From a letter from Ayatollah Ruhollah Khomeini to Soviet leader Mikhail Gorbachev in 1989

Iran's PressTV -- not known for accuracy -- is reporting that Russian destroyer docks at Bandar Abbas port:

“Marshal Shaposhnikov, a Russian Udaloy-class destroyer, has docked at this port with the aim of strengthening military ties between Iran and Russia,” Vice-Admiral Hossein Azad said on Wednesday.

In November, Russian Caspian Flotilla Commander Rear Admiral Sergei Alekminski called for closer cooperation between Iranian and Russian naval forces. He said that a fleet of Russian ships and frigates would pay a visit to an Iranian port in 2013.

Iran Navy Commander Rear Admiral Habibollah Sayyari said in February that the naval forces of a number of neighboring countries have expressed desire to send fleets to Iran and Tehran is ready to welcome them.

Iran Navy has been multiplying its naval presence in international waters. Iranian warships have visited some of the country’s neighboring and friendly countries including Syria, Sudan, Oman and Saudi Arabia.

Iran Navy has also sent vessels to the Indian Ocean and dispatched two ships via the Suez Canal to the Mediterranean Sea for the first time in February 2011.

To the degree that this is accurate, it goes beyond what YNet News reported last month, that Russian manufacturer selling missile equipment to Iran:

According to intelligence estimates, this does not represent official cooperation between Moscow and Tehran, but rather demonstrates the inability of the Russian government to prevent state firms from engaging in illegal trade with the Islamic Republic.

It is not just businesses but the Russian government itself which is determined to see to it that not only is Iran able to withstand sanctions, but that Iran is able to pursue its military goals as well  -- but at what risk to Russia? 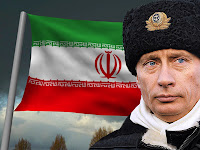 In the end, it will prove to be Russian assistance given to the Iranians in building their nuclear facilities and Putin’s reluctance to work with the US and other nations to stop Iran from developing a nuclear weapons capability that will come back to haunt Moscow. For as Russia’s Muslim population and the ranks of Islamist separatists grow in the future, the latter will be looking for a “game changing” means of imposing its influence over all Russia. That means may well come in the form of a nuclear weapon the Islamist separatists come to possess—courtesy of Iran.

Putin naively believes in a non-existent Russian/Iranian bond that places Moscow outside Iran’s crosshairs. But Iran eventually has in mind for Russia the same fate it has for other non-Islamic states—a fate shared by the Caucasus Emirate: i.e., to make the country subservient to shariah law.

Helping Iran is not just a repeat of the aid the Russians gave to Egypt against Israel until Sadat. After all, Egypt was nothing more than a client of the then-Soviet Union, with no designs on their benefactor.

The same cannot be said about Iran.