Gee, what gave it away? 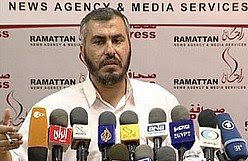 "We want to be part of the international community," Hamas official Ghazi Hamad told The Associated Press at the Gaza-Egypt border, where he was coordinating Arab aid shipments. "I thinkHamas has no interest now to increase the number of crises in Gaza or to challenge the world."

But he's not sure--by all means, let's sign now!

But of course, this article--coming from AP, cuts to the chase:

The group appears to be in the throes of an internal power struggle between hard-liners and pragmatists. Which group comes out on top will likely depend on who is able to garner the most benefits in postwar Gaza.

With hawks urging more violence, the window of opportunity to boost the voices of relative moderation is likely to be short.

In the Middle East, a pragmatist is a hardliner who doesn't have what it takes to win...yet. But that doesn't stop the AP from suggesting that good Hamas must be saved from its evil twin. Now, all that Hamas has to do is mouth the magic words and the world is ready to beat a path to their door, ready to do whatever it takes to become the new recipient of aid and Israeli concessions.
I wonder if Abbas is jealous.

In the meantime, Change is in the air--

It's unlikely Obama would talk directly to Hamas, which the US lists as a terrorist organization. However, if reconciliation talks between Hamas and its pro-Western Fatah rivals in Egypt bear fruit, Obama, unlike his predecessor, may accept a Palestinian unity government that includes the group.

That of course is merely conjecture, but that would be some trick, creating a Palestinian state where one has never existed before and putting it in the hands of 2 "pragmatic" terrorist groups that have shown a complete inability to govern their people.