Here is the first Gallup poll of Obama's approval rating after the first 3 days in office: 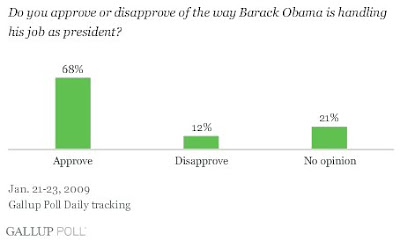 So far so good.
Michael Novak adds a note of caution, based on the experience of past Presidents:

In January of the year 1992, I was called upon to give a talk at the Renaissance Weekend at which President-elect Bill Clinton and his “co-president” Hillary were present (two for the price of one, the campaigner had earlier quipped). I said on that occasion what I now repeat on this: There was too much enthusiasm in the air, and too much false association with the Camelot of John F. Kennedy so early in 1960. Every president in my adult lifetime, I said, has come in with high hopes and been dashed into humiliation before his term of office had concluded. Kennedy. Johnson. Nixon. Ford. Carter. Reagan (dimmed by Iran-Contra). Bush 41. Clinton. Bush 43. The job of president is to cope with his own coming tragedy. No man can fulfill all the hopes that go with the office. His own strengths often undo him.

I don't know that every president has been "dashed into humiliation," then again I believe any president--not even Kennedy--has come into office with hopes has high as with Obama.
It will be an interesting presidency to watch, to see how Obama's performance compares with the high expectations--and how far the press will continue to try to ensure that it does.
UPDATE: Politico notes that the 68% indicates that Obama's numbers have actually started to go down:

Now that he’s in office, Obama’s approval ratings are starting to normalize, as partisan back-and-forth picks up. Just a week ago, Gallup found an astonishing 83 percent approval of how he has handled his transition, showing he had even won over most Republicans.

The new job-approval figure puts him at the upper end of opening poll numbers for presidents, but doesn’t set a record.

Obama may actually be human--story at 11.

Check out Memeorandum for more.

My fear is the response to every problem (or many) will be to continue to blame Bush.

That would be the knee-jerk reaction, and Obama and his staff have not yet established their bonafides as actual leaders yet.