How Do You Say 'Schadenfreude' In Russian?

Michael Totten has a post on an unexpected consequence of Russia's invasion of Georgia:

Russia has a problem. Moscow’s recognition of Georgia’s breakaway regions of Abkhazia and South Ossetia a few weeks ago has already encouraged some of its own disgruntled minorities to push harder for independence from the Russian Federation. Russia’s semi-autonomous republics of Ingushetia and Tatarstan have both ratcheted up their demands to secede.

Radical Islamists in Ingushetia, just across the Caucasus mountains from Georgia, have waged a low-level insurgency against the Russian government for some time now, though it has yet to reach the level of violent anti-Russian ferocity waged earlier by their cousins in neighboring Chechnya. A new group calling itself the People’s Parliament of Ingushetia has just surfaced after Russia’s adventure in Georgia with the stated aim of secession. More moderate opposition leaders also recently joined the cause of the radicals. Rebellious Ingush are not only emboldened by Russia’s recognition of Abkhazia and South Ossetia, they’re enraged by the assassination a few weeks ago of prominent anti-Kremlin journalist Magomed Yebloyev.

For all the complications this may cause Russia, I can't help but feel that this will amount to no more than an irritation at best to Putin. And if it becomes more than that, Russia will take action--and we have already seen that the West does not have the stomach for confronting Putin.

But it will be interesting to watch while it lasts.

Apropos of nothing in particular, here is the novel illustration that Wikipedia gives for Schadenfreude: 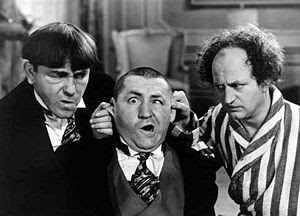 It has the caption:

The Three Stooges' comedy trademark was exaggerated slapstick routines where a performer's apparent pain created enjoyment and laughter among their audience.

However else you may describe Putin's Russia, slapstick just doesn't come to mind.