Back in July, Israel came out with maps and videos describing pinpointing Hezbollah weapon caches located near schools and hospitals.

A few days later, Hezbollah tried to come back with their own list of targets in Israel.

Now, Israel has come out with an even more extensive map of the location of  950 Hezbollah sites--showing the location of bunkers, monitor sites and other facilities located within civilian village--all in violation of UN Resolution 1701 as well as international law. 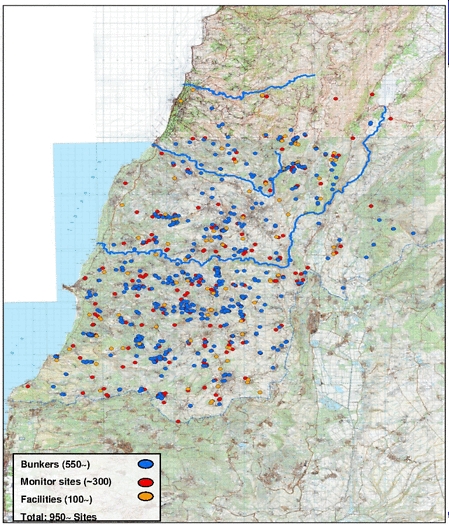 According to a statement put out by the IDF Spokesperson:

Since the Second Lebanon War Hizbullah has strengthened both in munitions and number of operatives with tens of thousands of weapons stored in civilian villages throughout southern Lebanon, this is direct violation of UN Resolution 1701

The Hizbullah terrorist organization is spread out between as many as 1,000 facilities in southern Lebanon, located in 270 civilian villages. The organization continues to acquire munitions and strengthen, funded by Syria which is also smuggling weapons to it. This includes weapons which can reach populations in the center of Israel in cities like Tel Aviv.

According to IDF intelligence, since the end of the Second Lebanon War in 2006, Hizbullah has built as many as 550 bunkers in the southern Lebanon region, holding various weapons. In addition, the organization has built 300 underground facilities and 100 storage units for munitions including rockets, missiles and other weapons.

Many of these terror centers are located near hospitals, private homes and schools, Hizbullah's way of taking advantage of the civilian population of Lebanon. According to the IDF Northern Command, Hizbullah militants have doubled in number since the end of the last war.

Today, Hizbullah is estimated to have an arsenal of more than 40,000 rockets. This being the case, if war breaks out, Hizbullah will be able to launch between 500 and 600 rockets at Israel every day. One of the organization's main civilian centers for storing munitions is the village of Al Khiyam in southern Lebanon, where hundreds of rockets and mortar shells with varying ranges are stored.

More than 100 Hizbullah militants operate in the village, including special forces ready for combat with IDF soldiers.

Hizbullah is thus trying to distort the balance of power in Lebanon and return to full, routine militant activity in southeast Lebanon, similar to its activity levels just prior to the war in 2006. Hizbullah militant activities are based in southern Lebanon, funded and maintained by Syria and Iran. All of these are in direct violation to the UN Security Council's 1701 decision, carried out on August 12th, 2006, at the end of the Second Lebanon War.

Ideally, revealing this to the UN would have an effect--but don't count on it.

At the very least the statement, like the presentation back in July, will let Hezbollah that Israel is well aware of what they are up to, and give Hezbollah something to think about.