Here is a video posted on YouTube by Gates of Vienna.
One cannot help but get the impression that the Muslims being interviewed just don't get the idea of a democratic right to free speech.


This inability, or refusal, to deal with the implications of a democratic society is evident in a recent article by the Palestinian News and Information Agency: WAFA Monitors Incitement and Racism in Israeli Media.

Considering the enormous amount of material put out by groups like MEMRI documenting the antisemitism in the Arab world in general and the incitement of hatred against Israel by Abbas and the Palestinian Authority by honoring terrorists, it was only a matter of time before they tried to claim that Israel was guilty of the same thing.

Take a look for yourself at what WAFA is claiming constitutes incitement--and then read Israel Matzav's rebuttal. He points out that there is an obvious difference between calling upon people to commit murder on the one hand, and saying that Israel should build more homes, on the other.


Moreover, there's a huge difference between an opinion expressed on the pages of Yediot or HaModia (to cite two of the newspapers in the report) and one expressed in al-Hayat al-Jadida. The Israeli newspapers are privately controlled and therefore the government has no responsibility for their contents. The 'Palestinian' one is controlled by the 'Palestinian Authority' which is therefore responsible for its content.

A claim that Israelis will pay in blood for (God forbid) the establishment of a 'Palestinian state' is not a call to murder 'Palestinians.' It's the expression of a political opinion (and unfortunately, probably true).

Again, Muslims are taking comments that they do not agree with or that they find insulting--and claiming that these are criminal acts that incite against Muslims. Of course, in the case of WAFA, there is an underlying motivation to try to find examples in Israel that can be called incitement.

Now lets put the shoe on the other foot and see what some Muslims are saying about Jews.

Of course, while Muslims may be virulently opposed to the criticism of Islam, it is no secret that there are a number of Muslims--including imams and scholars--who have absolutely no problem promulgating the most vicious kinds of the very form of incitement they claim to oppose:

The hypocrisy of those Muslims who will condemn those who criticize Islam while they themselves feel free--if not under an obligation--to denounce Jews and Judaism in the most noxious way is summed up by this cartoon: 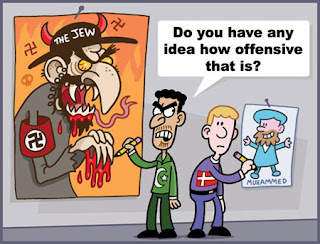 Even if there are Muslims who have difficulty coming to terms with the concept of democracy, it should be clear that respect is a two-way street.

Alana Goodman writes about Sen. Dick Durbin’s hearing on “Protecting the Civil Rights of American Muslims.” At one point, when Sen. Jon Kyl is questioning Farhana Khera, the executive director of Muslim Advocates, the following exchange occurs when Khera is asked whether she would condemn death threats against other minorities:


Kyl: I wonder if you’ve made any public pronouncement or statement condemning those religious leaders who’ve employed violent or hateful rhetoric or promoted hateful views of other’s religious groups. Have you done that or has your website done that?

Kyl: As a former staffer you know that my time is very limited. I don’t have a lot for background. I have three quick questions here, have you done that?

Khera: Well let me just clarify Sen. Kyl, my organization’s work is focused on protecting and upholding our constitutional values.

Kyl: So you haven’t condemned the hateful speech of those who have criticized others in the way that I mentioned then.

Khera: I guess I would have to know more specifically which particular case you’re talking about.

Kyl: Let me just ask you this. Would you today criticize threats of death or physical harm directed at writers or commentators who’ve criticized Islamic extremism? You would condemn that today, would you not?

Khera: I think we have, in our country, very cherished fidelity to the first amendment and that includes the freedom of speech –

Khera: Those who would threaten to kill somebody because of their political views, religious views – that’s inappropriate.[emphasis added]


Inappropriate? For someone whose job is to combat religious discrimination, that seems like somewhat of an understatement. It contrasted with Khera’s passionate denunciation of discrimination against Muslims during her testimony, which she called “a growing menace to the safety and social fabric of our nation,” that is “so vile,” and “has real life and death consequences for Muslim, Arab, Sikh and South Asian Americans and their families.”

Eventually Muslim leaders will start to show a clear commitment to condemning discrimination against other groups and not only their own--hopefully before the time we can expect imams and Muslim "scholars" to stop teaching their followers that Jews kill babies for their blood.