Hamas appears to have ended a two-year cease-fire that had held since the three-week Israeli military operation in Gaza ended in early 2009. But it was unclear if policy had shifted; there have been signs of a rift between Hamas’s hard-line military wing and the government, which may have led to the escalation. Hamas statements have said the recent attacks were a response to “ongoing Israeli crimes.”
New York Times, Rockets From Gaza Hit Deep Into Southern Israel

Let's take a look at the numbers:

The IDF Blog has posted the numbers for 2010 Statistics: Rocket and Mortar Fire from the Gaza Strip as of October 7th, 7 Oct 2010 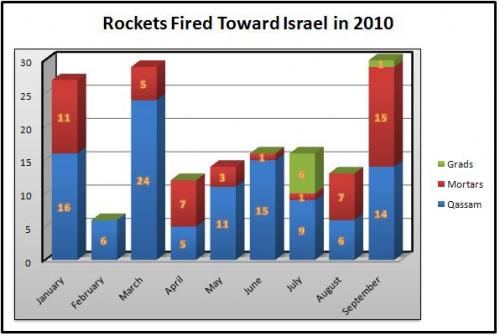 That chart does not include October-December,

Here is the complete number of  rockets fired into Israel for the year 2010:


Throughout the year 2010, over 235 Grad missiles, Qassam rockets and mortar shells were fired from the Gaza Strip into Israeli territory. 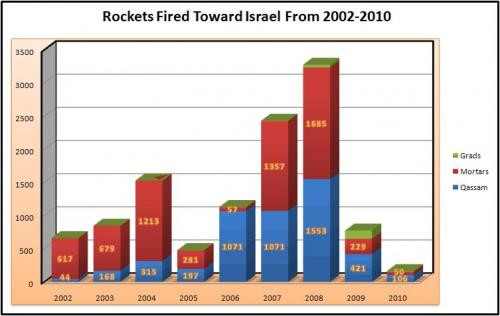 Of course, compared to the years before Operation Cast Lead, that would seem like a ceasefire.


No matter how you look at it, there simply has not been a ceasefire.

Nope. Not for a day.

The Israeli government pretends its a ceasefire until the Arab terror becomes too blatant to simply ignore.

Of course then the world starts bleating for a ceasefire.

Tell that to the people of Sderot, Beersheva and Ashkelon. They would love a real ceasefire.

Indian should learn from Israel that how to handle terrorists