Police said all sorts of "troublemakers" had got involved

Dozens of youths have rioted in the southern Swedish city of Malmo for a second consecutive night, setting cars on fire and clashing with police.
"We've had a very difficult evening," a police spokeswoman told the AFP news agency late on Thursday.

"There have been fires burning since this afternoon... extensive damage to public property, and... stone-throwing and bomb threats against police."

Apparently this story has not been getting a lot of coverage. Care to guess why? Here is a clue:

She said the trouble was linked to the closure of an Islamic centre.

UPDATE: Mark Steyn points out that the rioting is in Rosengard, a suburb of Malmo "the most heavily Muslim neighborhood of Sweden's most Muslim city."

Here is an excerpt from Muslims in the West By Yvonne Yazbeck Haddad: 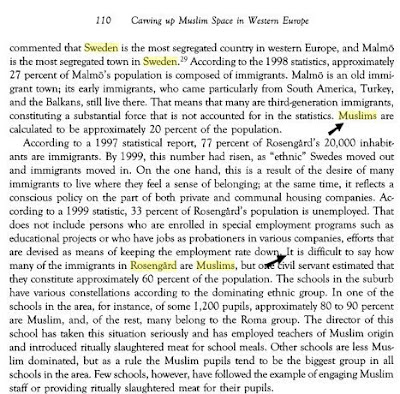 Muslims make up as much as 60% of the population of Rosengard and 20% of Malmo as a whole.

Moriel Ministries has a post, Muslims Rule Sweden, with links to a number of articles, with translations, of what is going on in Malmo. For example:

Malmø , Sweden . The police now publicly admit what many Scandinavians have known for a long time: They no longer control the situation in the nations’s third largest city. It is effectively ruled by violent gangs of Muslim immigrants. Some of the Muslims have lived in the area of Rosengård, Malmø, for twenty years, and still don’t know how to read or write Swedish. Ambulance personnel are attacked by stones or weapons, and refuse to help anybody in the area without police escort. The immigrants also spit at them when they come to help. Recently, an Albanian youth was stabbed by an Arab, and was left bleeding to death on the ground while the ambulance waited for the police to arrive. The police themselves hesitate to enter parts of their own city unless they have several patrols, and need to have guards to watch their cars, otherwise they will be vandalized. “Something drastic has to be done, or much more blood will be spilled” says one of the locals.

Even articles having nothing to do with the topic tend to mention the Muslim population when the topic of Malmo comes up:

Zlatan Ibrahimovic, one of the most spectacular soccer players ever, comes from the infamous, Muslim dominated area of Rosengård in Malmö, Sweden's third biggest city.

He presently plays for the major European club of Inter Milan and has formerly been contracted by Juventus, Ajax and Malmö FF among others.

Zlatan Ibrahimovic, known as "Ibra" to Italian soccer fans, is one of the very few Muslim immigrants from the Malmö region who've made major success in any area of life (another exception is Hip hop artist Timbuktu - not especially well known in the US though).

Many Rosengård Muslims strive to isolate themselves from the rest of Swedish society and are often dependent on welfare, in contrast to several Muslim immigrants in other parts of Sweden, for instance those living in Gothenburg (Sweden's second largest city after Stockholm) of which many have found work, for instance in big industries like Volvo.

So why does the BBC shy away from a problem that apparently so widely known?
Well, we are talking about the BBC...