60 Minutes: The Return Of The Bob Simon Amateur Hour


The description on Comcast is "Bob Simon investigates the possibility of an attack on Tel Aviv, Israel"

All fine and good. But based on Bob Simon's past inaccuracies in his last hatchet job, I am not reassured.


The last time he attacked Israel, Bob Simon ambushed Israeli ambassador Oren with a deceptively friendly invitation. From there, Simon fabricated a story that Israel was responsible for Christians fleeing--in spite of the fact that Israel is the only Middle Eastern country with a growing Christian population.

Now 60 Minutes and Bob Simon are back--in Tel Aviv
If Bob Simon's Facebook page is any indication, we may be in for another snow-job: 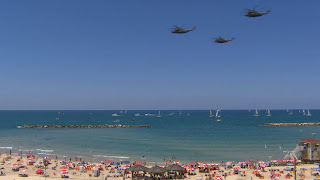 60 Minutes
TEL AVIV’S ATTITUDE: To live in Tel Aviv is to make a choice. With a history of bloodshed and bombings, the inhabitants of Israel’s largest city could live in fear of what could come next.

Or they could live for the moment in a sun-filled, dynamic city that is becoming renowned worldwide for its booming high-tech industry and lots of great night life.

This Sunday on 60 Minutes, Bob Simon travels from the bars to the beaches of Tel Aviv to examine how Tel Avivians live their lives.

First of all, as has already been pointed out by others, Bob Simon has the demographics wrong: Tel Aviv is not Israel's largest city--Jerusalem is.

And then there is the picture of the Tel Aviv beach.
And of course, no picture of the beach at Tel Aviv would be complete without Israeli military helicopters, which we are supposed to be is a common, symbolic occurrence.

But this is just another deception from Bib Simon.


With three IDF helicopters flying overhead, is 60 Minutes so very subtly trying to promote the image of Israel as a militaristic society impossible to escape from even on a Tel Aviv beach?

In fact, those helicopters flying in formation aren’t a regular occurrence at all. It happens but once a year on Independence Day when the Israeli Air Force performs an impressive flypast over the length of the Israeli coastline and major cities as a treat for those watching from below.

Below are pictures from the IDF performance on Independence Day from this year and last: 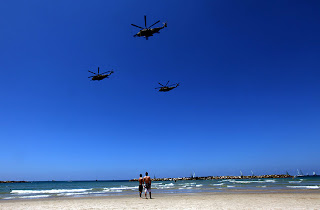 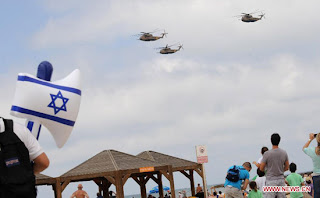 Of course, if you want to see military helicopters fly in formation, you needn't go to Israel.


and the Miami Beach Special Forces


Bob Simon could have hit those beaches after a few drinks at the bars there.

But that would only prove the point that Israeli military helicopters flying low over Tel Aviv likely occurs less often than it does in the US.

We'll have to wait till tonight to see what other stories Bob Simon has to tell us.

Hat tip: JED for the videos.