In West Bank, Palestinian Consumers Have No Interest In Israeli Boycott

While anti-Israel groups are pushing for boycotts of Israeli goods--and putting the jobs of Palestinian employees of those Israeli companies at risk--Palestinian Arabs in the West Bank are very comfortable buying Israeli goods: 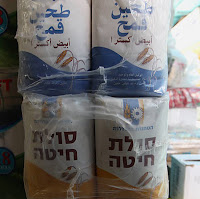 Brand names like Strauss, Tnuva, Osem, Elite, and other smaller Israeli brands are displayed in Hebrew and Arabic side by side in stores in Bethlehem. The names are even featured on the store signs and in the stores themselves.

"People love and buy Israeli products," says one Bethlehem minimarket owner. And while there are local dairies that sell their products in the Palestinian Authority, he says "lots of people prefer to buy Tnuva products simply because there is tighter supervision and they want to feel safe in what they buy.

"It has nothing to do with politics. When we buy a product from you (Israelis) we know it is under supervision and only made with fresh ingredients."


Selling Israeli products in Arab stores is nothing new. The superiority of Israeli products is well known--to the extent that the Arab factories printed the labels of the goods in Hebrew to make their customers think they were getting "the good stuff":


[Warehouse owner Imad] Naama said that during the period before the Second Intifada and before the establishment of the Palestinian Authority, products produced in Palestinian factories were marked in Hebrew and people were sure that was their place of origin.

After the Intifada broke out, manufacturers changed the inscription and removed the Hebrew so people refused to buy it, even though it was the exact same product. "They said they weren't willing to purchase it because it's what you call 'Arabic work'," he joked.

Faiz Hamadan and Khaled Saleima, stall owners at the market in Bethlehem said they had no political issue with selling Israeli made produce so long as it did not originate in the settlements.

"The Palestinian Authority patrols the stores and examines the country of origin of the inventory, no one here would sell anything that comes from settlement manufactories," they say.

The bottom line is that Arabs would be more than willing to buy Arab products, if those products were on a comparable level with what the Israeli companies were producing. However, in the absence of quality Arab goods appearing on the shelves, the Arab consumer--contrary to those in South Africa, Ireland and elsewhere--simply has no problem with Israeli products:


The calls to boycott Israeli products have mainly permeated at the slogan level. On the ground there is no sweeping implementation of the boycott.