Arlene Kushner On Iran: We're Being Had

No legislation regarding "unauthorized" communities in Judea and Samaria came to the floor of the Knesset today.
Prime Minister Netanyahu requested that the sponsors of these bills give him two weeks to work out the situation in Ulpana without legislation.   One can never be sure what he'll pull out of his sleeve, but I advise my readers not to expect a miracle solution from him. 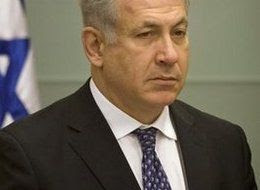 While Likud MKs had been released from coalition obligations, he had not given Likud ministers latitude to vote their conscience -- they would have been expected to vote according to coalition instructions.  This in itself made a win unlikely.  Ministers can buck coalition discipline, but are liable for disciplinary action if they do.  And they'd be very unlikely to do so in light of the prime minister's request. Which meant that pulling the legislation off the floor was a prudent move.
First MK Zevulun Orlev (Habayit Hayehudi) withdrew his proposed legislation.

Credit: Times of Israel
Ya'akov -Ketzeleh- Katz (Chair, National Union) withdrew with great reluctance and only at the last minute. 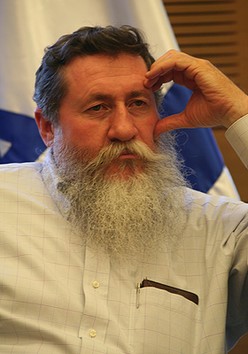 Credit: IsraelMatzav
~~~~~~~~~~
I've been told by a source inside the Knesset that Netanyahu pledged that Defense Minister Barak would make no move towards the demolition of the Ulpana houses until after the two weeks.
Then I was told that there was a "sort of" commitment from Netanyahu to release the ministers from coalition discipline if he is unable to resolve the issue and the legislation is brought to the floor.  Can't say exactly what "sort of" means.
~~~~~~~~~~
For the record, I've been advised that there are some real (if not overwhelming) differences between the two versions of the legislation, with Katz's version more broadly applicable to a variety of communities.
~~~~~~~~~~
I want to turn to the issue of Iran.  It is by far THE overriding issue.  The number of statements being made, and of words flowing from computer keyboards with regard to what is going on is rather daunting.
In a nutshell: The world is being "had."
Or is allowing itself to be "had," and there's a very good case to be made for this position.  See "Talks aim not to thwart Iran nukes, but to stop Israeli attack"
~~~~~~~~~~
Two things are going on.
Negotiations have begun again in Baghdad.  Just days ago the NY Times announced that the representatives of the international community who are negotiating with Iran (the five permanent members of the Security Council plus Germany) have said they are prepared to offer "an incentives package" if Iran will agree to end enrichment of uranium.
Incentives?  That was fast in coming.
Meanwhile IAEA chief Yukiya Amano has been in Tehran for talks with Iran's top nuclear negotiator, Saeed Jalili.  On Monday they announced an agreement regarding inspections of nuclear sites.   But there is so very much wrong with all of this.  Amano announced before the meeting that he and Jalili had determined that they would come to an agreement.
This being the case, we can speculate with reasonable certainty that Amano didn't go in with intentions of being tough.  He did not declare, "You want an agreement? THIS is what we demand."  It was more like, "Oh, we've already said we need that agreement, so let's see how we can arrange this." Questions have been raised regarding the cleaning of key sites prior to any inspections, and time limits that Iran wants placed on the IAEA's right to do inspections.
You don't have to be a nuclear scientist (forgive the awful pun) to see what's going on here.
The world is ever so hungry for "success."  Iran will accommodate to a point, to give the international community the sense of having achieved something -- and then will run rings around them all.
~~~~~~~~~~
In the face of all of this, I remain relatively calm, for the simple reason that I know neither Israel's prime minister nor defense minister is buying into all of this.
Monday night, Netanyahu said (emphasis added):

"Iran wants to destroy Israel and it is developing nuclear weapons to fulfill that goal. Leading world powers need to display determination and not weakness in the face of this malicious intention. They should not make any concessions to Iran.
"They need to make clear and unequivocal demands that Iran stop all of its nuclear enrichment activity, remove all the material that has been enriched until now and dismantle the underground nuclear facility near Qom. Only then can we be sure Iran will not get an atomic bomb."

Netanyahu made it clear that Israel's views on this matter "will not change."
~~~~~~~~~~
And today, in an Israel Radio interview, Barak said (again, emphasis added):

"Obama and the representatives of the West are not naive.  But they want to achieve progress, so they are willing to compromise.
"Israel is demanding a complete halt to Iranian uranium enrichment."  Barak added that the West was setting the bar too low and demanding too little.  "We mustn't blink, concede, or cave at the last minute."

As to Amano's negotiations in Tehran, Barak observed:

"The Iranians orchestrated things in such a way that when the Baghdad talks rolled around they would be able to tell the world powers that they were already coordinating the procedural details with the IAEA, and when Amano wanted to talk about the essential issues they could say that they were working those out with the world powers. It gives them a little wiggle room."

~~~~~~~~~~
Please, understand this critical point, which is being made by Israeli officials in the Prime Minister's Office, the Defense Ministry and the Foreign Ministry:

The IAEA agreement only relates to monitoring and is not enough to halt Iran's nuclear progress.

As one senior official was cited as saying (emphasis added), "The problem is [that] Iran's program is continuing unabated and needs to be stopped. We have seen what happened with agreements between the IAEA and Iran in the past. Terms were agreed but facilities were still set up openly, like Natanz in 2002 and Qom in 2009. The latest IAEA report reveals Iran's scams and deceptions."
~~~~~~~~~~
Maj. Gen. Itai Baron, head of the Military Intelligence research department, provided a briefing yesterday for the Knesset Foreign Affairs and Defense Committee
What he said was that Iran was moving ahead with its nuclear program — enriching uranium and maintaining full operation of the facilities near Qom and Bushehr. Iran has trebled its pace of uranium enrichment to 20 percent. Baron estimates that by the end of 2012, Iran will have enriched sufficient uranium to 20% to build a single nuclear device.
I've read elsewhere that beyond this point it would take Iran somewhere between six and 18 months to produce a bomb.
So, with so many people patting themselves on the back with regard to "progress" in Iranian negotiations, precisely who is paying attention to this critical information?
~~~~~~~~~~
In closing, I leave you with this: Barak has made it clear, once again, in the face of these "negotiations," that Israel does not rule out any option.  What this means is that if a deal is struck with Iran, and Israeli leaders deem it insufficient, so that Iran remains a danger to Israel and the world, we will act as we see fit.
We'd stand alone, and so be it.  It would hardly be the first time.
~~~~~~~~~~
© Arlene Kushner. This material is produced by Arlene Kushner, functioning as an independent journalist. Permission is granted for it to be reproduced only with proper attribution.

Email ThisBlogThis!Share to TwitterShare to FacebookShare to Pinterest
Labels: Negotiations With Iran On Nuclear Facilities: We're Being Had