Identity Of The OTHER Mossad Spy In Iran Revealed

By now you've read about the alleged Mossad spy from Israel who was apparently executed by Iran. You may also have read that the passport used to prove the identity of the spy was forged by Iran--the country with the world's most underpaid graphic artists: 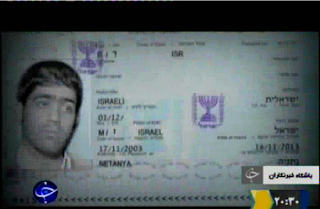 It just so happens that doing a basic online search reveals that the alleged Mossad spy did not act alone--he had an accomplice, one who is highly placed in the upper levels of the Iranian government:

Now we can understand that Ahmadinejad's re-election is the one Zionist conspiracy that the Iranian government missed.

Technorati Tag: Israel and Iran and Mossad and Ahmadinejad.

Email ThisBlogThis!Share to TwitterShare to FacebookShare to Pinterest
Labels: Fake Passport of 'Mossad Spy' Photoshopped by The Iranian Government