Shame On UJA-Federation and John Ruskay For Ignoring Your Voices!

You have spoken up loud and clear that you do not want groups that support Boycotts, Divestment and Sanctions against Israel to be included in the Celebrate Israel Parade. You have sent emails, letters and made phone calls to the UJA-Federation and the Jewish Community Relations Council (JCRC), telling them that you do not want to march alongside radical anti-Israel groups like New Israel Fund, B'Tselem and Rabbis for Human Rights.

New Israel Fund and its allies actively promote economic warfare against Israel through Boycotts, Divestment and Sanctions, and are funded by the European Union for the express purpose of undermining Israel. Yet, despite all your brave efforts, John Ruskay and UJA-Fed refuse to listen. They insist that New Israel Fund and its allies march in the Celebrate Israel Parade on June 3rd, thereby legitimizing their radical anti-Israel views.

"It is shameful that the UJA Federation and the Jewish Community Relations Council (JCRC) are supporting the New Israel Fund in their efforts to delegitimize and fund Boycotts, Divestment, and Sanctions against Israel," said Richard Allen, active member of the Pro-Israel Parade Committee. "It's time the UJA Federation stop supporting radical groups that work for BDS against Israel."

We need to redouble our efforts in the next few weeks to prevent this travesty. If the BDS supporting groups are allowed to march, we will call for posters and leaflets on the day of the parade.


Let's Not Forget the Facts and Make our Voices Heard Today!

To voice your opinion and concern please contact the following:

We thank you for your attention to this crucially important issue, and look forward to participating with you in the Celebrate Israel Parade.

Here is a banner for the protest: 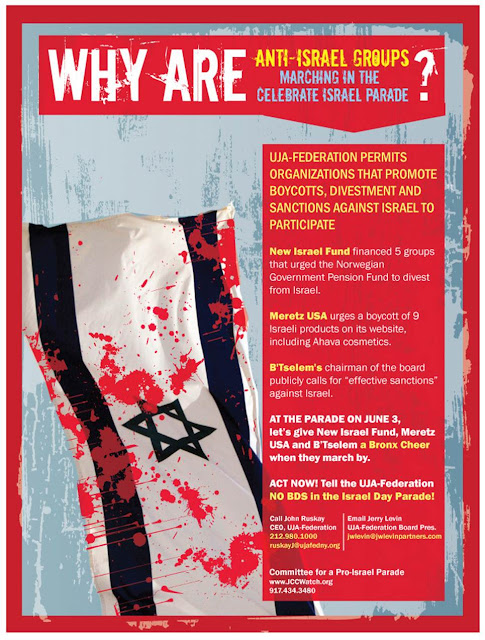 Email ThisBlogThis!Share to TwitterShare to FacebookShare to Pinterest
Labels: NIF And Friends Will March in Israel Day Parade