The following by Robert S. Wistrich is posted here with permission: 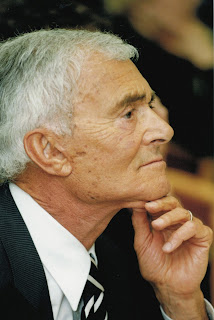 The Legacy of Vidal Sassoon

I first became aware of Vidal Sassoon’s rise to prominence about 45 years ago as a young student at Cambridge University. It was the age of Beatlemania, the heyday of the fashion designer Mary Quant and her mini-skirts, of the celebrity photographer David Bailey, the spirit of Carnaby Street and the slightly hysterical excitement of “Swinging London.” Vidal Sassoon was part of that universal “Youthquake,” of a newly affluent and style-obsessed Western consumer society.


He was the man who first wedded together hair and clothing design. The poor boy from the East London ghetto was the visionary young Briton who first turned hairdressing into an art-form, eventually emerging as the world’s most famous hair stylist – a true artist with scissors. Fascinated by the geometry of hair, Sassoon pioneered innovative techniques that gave an elegant simplicity, movement and harmony to hair while getting rid of whatever seemed superfluous to the natural look. For him, less really meant more.

When I first met Vidal in the late 1980s in Jerusalem, I had little inkling of the life-experience and artistry that lay behind his celebrity. I remember my surprise when he casually explained to me at a reception that he regarded cutting hair as being akin to architecture with a human element. When he invoked modernist architects like Frank Lloyd Wright, Le Corbusier or Mies van der Rohe, I frankly thought he must be kidding me. Only much later did I begin to appreciate that in his creative work, form and function did genuinely coalesce.

It was not until the mid-1990s, when I was teaching in London, that I really came to know the personality behind the flamboyant popular icon. Sitting next to him at a dinner-party in London, I discovered him to be an immensely likeable, friendly individual, refreshingly irreverent about formal rules with a very British style of self-deprecating humor. His very gentlemanly manner concealed a determined, self-disciplined perfectionist and a shrewd entrepreneur who knew exactly what he wanted and how to achieve it.

Vidal firmly believed that people create their own destinies and that success (as his own life demonstrated) was a combination of creativity, focused will-power and hard work – even if an element of luck could never hurt.

Ten years ago, when I became the head of the Vidal Sassoon International Center for the study of Antisemitism (SICSA) at the Hebrew University of Jerusalem, my contact with Vidal became more regular and intense. It was only then that I learned how much his rags-to-riches story also had a Jewish dimension; how he had been raised in a Jewish orphanage in London’s East End during the Great Depression; how the ugly antisemitism which he encountered as a child in 1930s London during the rise of the Mosleyite blackshirts, left an enduring mark on his psyche. Vidal was not at all reticent in speaking about these experiences. He liked to recount how by the age of 17 he was already battling the local fascists and anti-Semites on the streets in the East End of London. This activist revulsion against anti-Jewish hatemongering would never leave him.

Vidal’s decision to volunteer two years later to fight in Israel’s War of Independence was probably the single most decisive experience in his life. In conversation, he often highlighted 1948 – the year that he spent in the Palmach, helping to stop the advance of the Egyptian Army from the Northern Negev – as the turning point which forged his identity and gave him the confidence to succeed in life. His eyes would twinkle as he recalled the sense of personal exhilaration at having taken part in the rebirth of the Jewish nation after 2,000 years of crushing oppression at the hands of the Gentiles. He liked to say that while America (to which he had moved in the 1970s) gave him his freedom, it was Israel that created his sense of Jewish dignity.

In 1982, convinced by Prof. Yehuda Bauer, Vidal established the world’s first center for research into anti-Semitism in Jerusalem. Though he lived in far-off Los Angeles, the work and the future of our center was never far from his mind. No less important was his contribution in promoting the work of the Hebrew University, whose commitment to learning, science, tolerance and cultural pluralism he highly valued.

Vidal instinctively understood the need for a high-level research center devoted to the in-depth study of anti-Semitism and for the proliferation of knowledge about it, in order to prevent any repetition of the Holocaust and the havoc which anti-Jewish persecution had wrought throughout history. In this respect, he was unusual among the Anglo-Jews of his day. Few perceived as clearly that anti-Semitism was an ongoing threat, never far beneath the surface even in times of relative calm.

Vidal always took immense pride in our scholarly output and the public outreach work that the Sassoon Center has been able to initiate during the past decade. We shared a common conviction that it was imperative to get academics to fight anti-Semitism in the public arena and not only in the study-room – something much easier said than done if one wishes to maintain the highest intellectual standards.

At our last meeting in California two years ago, Vidal openly wondered if most of his fellow-Jews in America had really learned anything from the Holocaust or fully grasped the predicament of an embattled Israel. We met in Santa Barbara, where I had arrived to give a public lecture and Vidal graciously decided to travel from Los Angeles so that we could spend the entire day together.

As always, he looked trim and well-groomed. He was remarkably warm and encouraging on a personal level while reminiscing freely about his own life and career. His serenity was all the more striking since we both knew he was probably living on borrowed time. Insistently, he dwelt on his Jewish roots. He told me that ever since he could remember, he had carried within him this seemingly inexplicable and mysterious sense of Jewish difference. Though he remained a Universalist who passionately believed in the oneness of mankind, for him Jewish uniqueness was simply a fact.

At his request, I updated him on the current anti-Zionist campaigns and global efforts to delegitimize Israel. He remarked that thirty years ago, when he established the Center, it seemed that nationalist anti-Semitism, Christian religious fundamentalism and Holocaust denial would be the major concerns. Now he realized that radical Islam, left-wing hatred of the Jewish State and the boycott campaign against Israel were no less troubling. But few if any of his celebrity friends (some of whom we would visit that day) saw the gravity of the hour. Certainly, they might acknowledge that anti-Semitism was a problem, but not in the United States. Even in Britain, the country to which Vidal still felt strongly attached, there was only a limited awareness among his friends of how toxic the atmosphere surrounding discussions of Israel had already become.

It was a sobering conversation, especially with the dark Iranian cloud looming ever larger on the horizon. Nevertheless, he was hopeful that the United States would not abandon Israel in its hour of need. Repeatedly, Vidal would come back to the sheer miracle of Israel’s survival and its stunning achievements in the face of adversity. He had been here at its birth when 600,000 Israelis successfully fought off five invading Arab armies. The “first start-up nation” was not only still in place but a thriving, powerful country with six million Jews, determined to defend themselves. It had grown by a factor of ten in just over 60 years.

Since the 1960s, through his willingness to experiment, his visual awareness and sense of style, Vidal Sassoon helped make the world a better and more beautiful place. Through the Center, which I have had the privilege to direct during the past decade, he also helped ensure that the world was a safer place for the Jewish people. Vidal is no longer with us but his legacy lives on in every one of us. It is now our collective responsibility to maintain these crucial goals with the same generosity of spirit and vision as Vidal himself.


Prof. Robert S. Wistrich is the director of the Vidal Sassoon International Center for the Study of Antisemitism (SICSA) at the Hebrew University of Jerusalem. His latest book, From Ambivalence to Betrayal: The Left, the Jews and Israel

, was just release by the University of Nebraska Press.

Email ThisBlogThis!Share to TwitterShare to FacebookShare to Pinterest
Labels: The Legacy of Vidal Sassoon