Eli Valley, the talented and provocative cartoonist who brought you an uncircumcised God raping the Israelites, aims his pen at the new generation of young Jewish social entrepreneurs and the clueless Jewish community who is in their thrall.
Why Apply for ROI? Because Eli Valley is an alum!, on eJewishPhilanthropy.com, March 19, 2009


Back in 2008, Eli Valley--cartoonist for The Forward--came up with the following rather cartoon assailing Pro-Israel Christian Evangelists with every negative stereotype that he could think of: 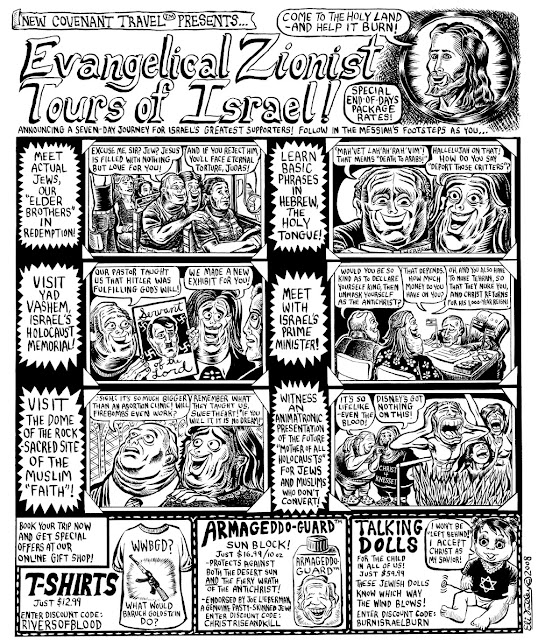 If you thought that Valley could not sink any further, then you have not seen his latest attack, where in a cartoon for +972, Eli Valley draws a cartoon depicting Israeli Prime Minister Netanyahu raping President Obama: 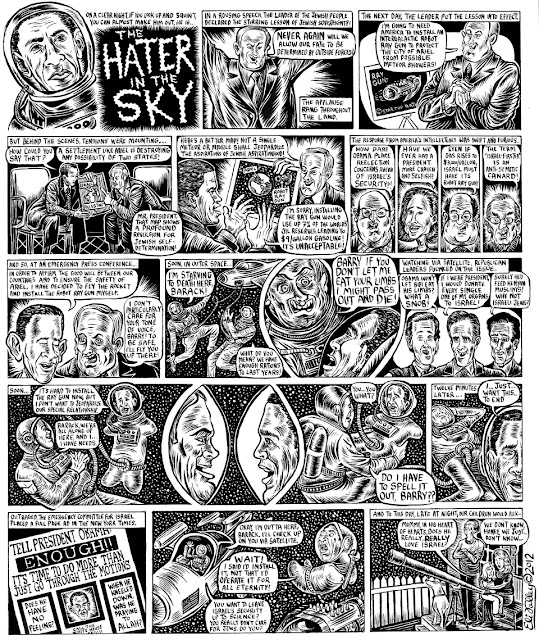 Adam Kredo writes that The Forward's 'Artist In Residence' Goes Too Far With Rape Cartoon, raising the obvious question of how Valley's cartoon reflects on The Forward:


The Forward, which has come under fire from Jewish insiders for shirking its journalistic responsibilities to promote a far left agenda, has decried what it claims are unfair conservative political attacks.

However, it has remained mum thus far regarding Valley’s latest offering.

Here is the offensive segment of Valley's cartoon as highlighted in Kredo's post:

+972 claims that it provides "independent reporting and commentary from Israel and Palestine," so with its obvious extreme liberal bent I suppose it will have no trouble defending offensive material such as this as free speech etc.

Obviously, no one is going to confuse Eli Valley with Norman Rockwell and his work for the Saturday Evening Post, but there are plenty of political cartoonists critical of Israel who have drawn cartoons accusing Israel as a state of horrendous things without sinking to a personal attack on its leader

Which brings us back to The Forward.

Based on the Evangelical Zionist Tours of Israel cartoon, we know that The Forward is not above a certain level of viciousness in attacking Israel and its allies.

We need to hear what The Forward thinks about this latest attack piece by Eli Valley.

Note: Eli Valley drew cartoons about rape even before joining The Forward. Back in April 2006, The Forward reported a contest to see which Jewish cartoonist could draw the most antisemitic cartoon:


Earning the dubious honor was “September 11” — a cartoon that depicts the iconic figure of a Jewish fiddler watching somewhat mysteriously — if not downright conspiratorially — from the Brooklyn Bridge as the Twin Towers burn.

That cartoon was not Valley's--but this one was:


According to [contest co-creator Amitai] Sandy, “My personal favorite was actually ‘The Jew Monster,’” a cartoon by New York’s Eli Valley depicting a Jew with two penises — “so he could rape both Muslim and Christian girls at the same time.”
“It is not all that difficult to joke about others,” Sandy added in a moment of seriousness. “It takes a lot more self-confidence to joke about yourself.”

After 3 times, it's time for Valley to find another theme.

Technorati Tag: Eli Valley and The Forward and 972.

Well what happens is that the 972's of the world wind up driving off all the people who aren't psychotic, leaving only the same 37 people screaming to each other. Like Salon magazine.