A few years ago, a journalist reported that Malcolm Hoenlin, the influential executive vice chairman of the Conference of Presidents of Major American Jewish Organizations, had a photo in his conference room of Israeli F-15s flying over Auschwitz. It is a photo of fantasy. Israeli jets never bombed Auschwitz and never will. What they have bombed, in recent years, is the Gaza Strip, a fenced in, hideously overcrowded, desperately poor slum from which terrorist groups sometimes shell Israel.
Peter Beinart, The Crisis of Zionism [emphasis added]


This passage from Peter Beinart's book The Crisis of Zionism

became one of the focal points last night in the debate between Beinart and Daniel Gordis over his book.

Challah Hu Akbar notes Peter Beinart's ignorance of Israel and Gaza as reflected in that quote:

It is astounding that someone like Beinart who presumes to lecture Israel on how it should conduct its affairs--and tries to dissuade support of Israel--should be so blind to the harsh reality of the 7 year long terrorist war conducted by the Hamas terrorists on Israel.

It is not unexpected then that Beinart so totally misunderstands--and misconstrues--the symbolism of Israeli jets flying over Auschwitz. Indeed, Beinart actually thinks the picture of those jets was Photoshopped. 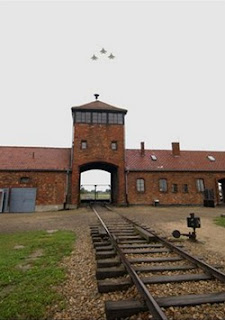 Here is a video that shows those planes were no fantasy:

What is made clear in the video is that the symbolism has nothing to do with bombing but is an expression of the fact that Jews have their own state and are no longer helpless against its enemies--a fact that for some reason seems to make Beinart uncomfortable, yearning for a simpler time when the security of Jews depended on the whim of the countries in which they found themselves.

Challah Hu Akbar has much more on this.

While we're at it, let's address another Beinart error, describing Gaza as "a fenced in, hideously overcrowded, desperately poor slum". Putting aside the security fence that has saved the lives of who knows how many Israelis from Hamas suicide bombers--Beinart's blind claim that Gaza is hideously overcrowded, is just that. Blind. Even back in 2008, Tel Aviv was more crowded by far than Gaza:
The numbers for London, Tel Aviv metro area, Moscow, Tokyo/Yokohama and Warsaw are from the City Mayors site: http://www.citymayors.com/statistics/largest-cities-density-125.html

Nor is Beinart's simplistic description of Gaza as a slum accurate:

Beinart has so totally imbibed the one-sided Arab view of the Middle East, that his resultant book book Crisis of Zionism is badly flawed  and can only further obfuscate the situation, adding more heat--but no light.

We look forward to further Beinart debates that further shed light on Beinart's one-sided view of the Middle East.


Technorati Tag: Israel and Gaza and Peter Beinart and The Crisis of Zionism.

Email ThisBlogThis!Share to TwitterShare to FacebookShare to Pinterest
Labels: Peter Beinart And The Crisis of Zionism