The following is from Audrey Jacobs, San Diego Regional Director of StandWithUs, and is reposted with permission:

Students for Justice in Palestine and Arab Student Union member Noor El-Annan was emailed the photo by a friend, posted it on her Facebook profile and commented in the front page of the Guardian newspaper "I was offended and disgusted that someone would think that's OK to wear to a party."
In stunning irony, Students for Justice in Palestine (SJP) members dressed up April 18, 2012 as Israeli soldiers in the center of campus and held a mock "Israeli Check Point" to portray a check point used by Israel in the West Bank to prevent terrorist attacks against civilians. "As a Jewish student I'm offended and disgusted that SJP students think it's OK to dress up as Israeli soldiers, physically and verbally harass students, and actively portray Israelis as aggressive and abusive." said Cohen. 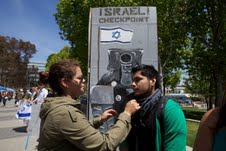 Since April 14, 2012, when UCSD settled with the federal government to end an investigation into racial tensions on campus , numerous incidents have been occurring on campus between Muslim and Jewish students and faculty not only at UCSD but throughout the University of California system.
In the April 26, 2012 issue of the UCSD Guardian newspaper, Amal Dalmar, co-chair of the Student Affirmative Action Committee (SAAC), compares Cohen's photo to the Compton Cookout, the racially charged incident targeting African Americans that initiated a Federal investigation of the University.   Dalmar and other members of SAAC contacted 13 administrators including Vice Chancellor of Student Affairs Penny Rue and Assistant Vice Chancellor for Student Life Gary Ratcliff to meet today April 30, 2012 regarding the photo.
In the settlement with the Federal Departments of Justice and Education, UCSD promised to maintain an Office for the Prevention of Harassment and Discrimination (OPHD) to receive, investigate and resolve complaints.  Cohen, a Persian Jew of Middle Eastern descent and with Muslim family members, is outraged by the attacks of him being racist and is filing a complaint with the OPHD.
On February 29, 2012 Students for Justice in Palestine group proposed to the Associated Student (AS) government a resolution for the University to divest from its shares in GE and Northrop Grumman, corporations that manufacture materials used by the Israeli Defense Forces in the Israeli-Palestinian conflict.  The resolution failed on a vote of 20 to 13 including Cohen's vote against it.  Members of the newly elected UCSD AS government are discussing reintroducing the divestment resolution in the coming weeks during "Justice in Palestine Week" which features thelargest "Israel Apartheid Wall" display in the world.
Cohen feels the slanderous accusations and campaign by Dalmar and El-Annan are part of a trend of anti-Israel students trying to silence pro-Israel voices on campus.  "This is clearly a politically motivated attack since I voted against divesting from Israel. Many Council Members accusing me of being racist and demanding for me to be 'held accountable', referenced my vote against divestment. Their libelous accusations are meant to silence my voice. I will not be bullied into silence."
This slanderous attack against Cohen echoes last month's intimidation tactics and false accusations against a pro-Israel UCSD Israeli Professor Shlomo Dubnov, President of the UCSD Scholars for Peace in the Middle East. During the divestment hearing Dubnov testified against the resolution.  Two days later Dalmar and other members of SAAC sent a letter endorsed by anti-Israel faculty to the administration accusing Dubnov of racist rhetoric and verbally attacking pro divestment student Noor El Annan.  El Annan is the same student who is leading the campaign targeting Cohen's photo as being racist.   After reviewing video evidence, last week the UCSD Office of Prevention of Harassment and Discrimination (OPHD) completed the investigation and cleared Dubnov of El Annan's allegations.
The accusations targeting pro-Israel student and faculty at UCSD is part of a state-wide trend of bullying incidents by anti-Israel students which prompted University of California President Mark Yudof to issue a statement March 8, 2012 decrying the lack of decorum and calling for "the moral and ethical imperative for all of our University of California students, faculty and staff members to foster a climate of tolerance, civility and open-mindedness."  Yudof  said hate-driven physical and verbal attacks on any group or individual that are meant to silence or intimidate those who would express differing opinions is not acceptable.
UCSD officials are concerned there will be further disruption by anti-Israel activists during this Thursday's appearance by Israeli Deputy Foreign Minister Danny Ayalon who is scheduled to speak May 3, 2012 at 6 pm at the UCSD Price Center Theater.  Recent vicious outbursts at other UC campuses when Israelis spoke at UC Davis are reminiscent of Israeli Ambassador Michael Oren's presentation at UC Irvine in 2010 when he was shouted down by anti-Israel protestors which resulted in the conviction of 10 students.

Email ThisBlogThis!Share to TwitterShare to FacebookShare to Pinterest
Labels: Anti-Israel Bias On US Campuses, Intimidation of Pro-Israel Groups on Campuses

I am left puzzled what the response to physical and verbal abuse actually should be in this precise context. Because I can assure you if it were me it would get very ugly very quickly.