Ad: What Liberals Are Saying About President Obama And Israel

Today the Emergency Committee for Israel published a full-page ad in 23 Jewish newspapers across America highlighting liberal criticism of President Obama's Israel record. Relying on the words of prominent figures such as Abe Foxman and Martin Indyk, the ad details Obama's deeply troubled relationship with the pro-Israel community over the last three years, and the mounting danger to Israel posed by an Iranian regime that is closer than ever to obtaining a nuclear weapon.


"President Obama has been trying to have it both ways -- pursuing policies that weaken the U.S.-Israel alliance while boasting on the campaign trail that he is the most pro-Israel president since Truman. As the Obama campaign attempts to mislead about the president's record, it is important that American Jews understand what many prominent liberals are now conceding -- this president's approach to Israel has been hostile, ineffective, and at odds with the promises he made in 2008." 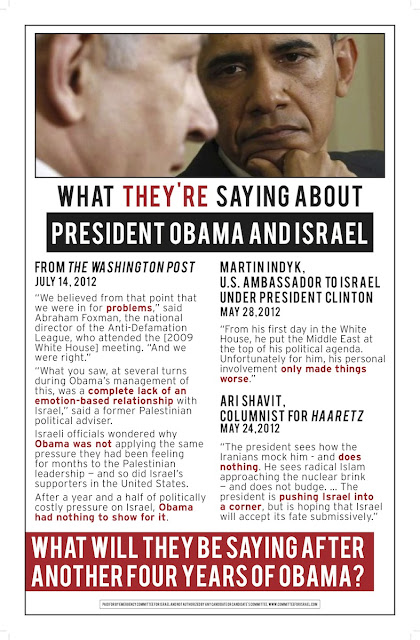 Technorati Tag: Israel and Obama and 2012.

Email ThisBlogThis!Share to TwitterShare to FacebookShare to Pinterest
Labels: Election 2012, Is Obama A Friend Of Israel?