Arlene Kushner On The Threat Of Chemical Weapons In Syria

I begin today by sharing the URL for my new article: Why Republicans Must Take The Lead On Israel

It makes significant points with regard to the fact that it may be prudent, helpful and timely for decision-makers and politicians on the right in the US -- most notably Republicans -- to move beyond dead but politically correct positions and support Israel's right to settle in all of Judea and Samaria.

My article -- which I hope you'll read -- does not ask Republican Congressman or party decision-makers to renounce the possibility of a Palestinian state (as much as I personally am opposed to it, and as much as it's obvious that the Palestinian Arabs themselves are not on board for a "two-state solution).
What I simply ask is that they consider endorsing the positions already advanced by an official committee appointed by the prime minister himself: That is, that Jews have a legal right to settle in Judea and Samaria.
Please, share this broadly:  It's time to encourage a new paradigm of thinking.
~~~~~~~~~~
And there is at least one Congressman who is already on board with this new paradigm of thinking:
Congressman Joe Walsh (R-8th district IL) is urging congresspersons to co-sponsor a resolution that would endorse the Levy report and recognize the rights of Jewish communities in Judea and Samaria. 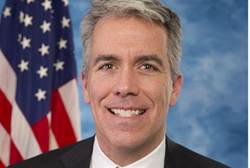 Credit: Congressman Walsh's office
~~~~~~~~~~
If you are a constituent of Congressman Walsh, please consider sending him a message of support for this:
~~~~~~~~~~
According to reports from the Free Syrian Army, Syria has moved its weapons of mass destruction to airports at its borders:
"We in the joint command of the Free Syrian Army inside the country know very well the locations and positions of these weapons.

"We also reveal that Assad has transferred some of these weapons and equipment for mixing chemical components to airports on the border."

Airports?  The main one is in Damascus (the only airport near Lebanon).  Three other international airports exist in the northern part of Syria, near Turkey, according to a map of airports:
~~~~~~~~~~
The statement said that the weapons were moved by Assad as a threat against the international community, which is talking about intervention in the country.  It totally downplayed any thought that Assad might use such weapons against Israel:
"The regime that has not fired a single bullet against Israel during the course of three decades is certainly not going to use chemical weapons against that country."
Yet this begs the question and provides no assurance.  It is true enough, that the Israeli-Syrian border has been quiet.  But what Assad has done instead of causing ferment on that border is transfer weapons to Hezbollah, thereby stimulating anti-Israel action on the Lebanese border instead.
~~~~~~~~~~
After Defense Minister Barak made a statement on this matter the other day, Prime Minister Netanyahu reiterated the message in the clearest of terms: Israel will not permit transfer of non-conventional weapons from Syria to Hezbollah.
~~~~~~~~~~
In a radio interview yesterday, Amos Gilad, Director of Policy and Political-Military Affairs for the Ministry of  Defense, said that at the moment the Syrian army remains in full control of the country's chemical and biological weapons.  He did not believe that the fact that Assad was moving his WMD stockpiles around had serious implications, so long as his forces were still securing them.

"Everyone is warning Assad not to use these weapons at all – it's been a very clear warning and the Syrians have heard these warnings...our information shows that Hezbollah does not have weapons of mass destruction originating from Syria."

~~~~~~~~~~
Barry Rubin has a new piece up about the situation in Syria.  One of the things he does is allude to the various groups that compromise the Syrian populace, and which have various positions on what is happening at present.  An "incomplete" list includes:
Alawites -- who are the minority ruling group and "who pretend to be Shia Muslims but really aren’t Muslims at all"; the much beleaguered Christians; the Kurds who seek independence with Kurds in places such as Iraq and who "have essentially walled off their northeast section of the country";  the Druze, who live in the southwest of Syria near Israel (near the Druze on the Golan Heights); and finally the Sunni Muslim Arabs who comprise about 60 percent of the population, but  "are very much divided among themselves...Islamists, both Muslim Brotherhood and Salafists" and urban moderates.
Read: Will the Rebels Win Syria’s Civil War and What That Means
~~~~~~~~~~
Rubin discusses the various outcomes of the current war in Syria -- who will have the upper hand, who is likely to cooperate with whom, who is probably facing persecution.
This brings to mind the proposition of Dr. Moti Kedar, expert on Arab affairs and culture, who has said many times over the years that there will be no peace in this region until we have separate enclaves -- autonomies/sovereignties -- of unified ethnic groups.  The ethnic and political diversity of Syria is simply not conducive to a peaceful state of affairs.  Assad has maintained relative stability only via iron-fisted oppression.
~~~~~~~~~~
Rubin suggests that, while it isn't over yet, Assad is weakening and his days numbered.  But since he wrote this, I've picked up a report that Assad's forces are gaining strength in Damascus.  So this is likely to go on for some indeterminate time yet.
Most troublesome -- but hardly surprising -- is an analysis in The Times of Israel by Dr. Kedar of the devastating attack on Assad's security headquarters last Wednesday.  This attack, says Kedar, was perpetrated by Islamists and not by the Free Syrian Army, as originally thought.
Kedar alludes in this article to some potential fragmentation of the state.
Read: Islamist group, not Free Syrian Army, blew up Assad’s inner circle, Israeli expert says
~~~~~~~~~~
Here in Israel, we're dealing with a political ferment of a different sort.  But, my friends, discussion of this will have to wait until another posting.
~~~~~~~~~~
© Arlene Kushner. This material is produced by Arlene Kushner, functioning as an independent journalist. Permission is granted for it to be reproduced only with proper attribution.

Email ThisBlogThis!Share to TwitterShare to FacebookShare to Pinterest
Labels: Syria Admits It Has Chemical Weapons