IOC President Jacques Rogge Demonstrates His Objectivity while in the Palestinian territories 2 years ago: 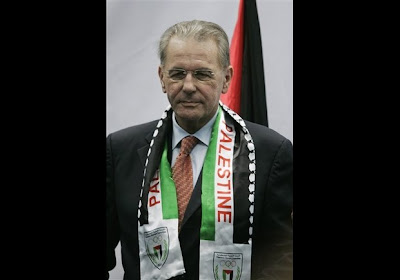 
"President of the International Olympic Committee Jacques Rogge pauses during a press conference in the West Bank city of Ramallah, Tuesday, Oct. 5, 2010. Rogge on Tuesday expressed concern over "obstacles" facing Palestinian athletes, and in veiled criticism of Israel said athletes should be granted free movement regardless of politics. [emphasis added]"

The issue isn't politics, it's terrorism -- the issue Rogge confused 2 years later.
Then again, why is Rogge mixing his precious sports with politics at all?

Rogge claimed that he doesn't want to politicize the Olympics, thus no moment of silence for the Israeli Olympians. The question that I have is, if the Olympics shouldn't be politicized, what was he doing in the WB in the first place?

At the time, Rogge spoke with Peres in Jerusalem and gave a press conference, and also had pictures taken of himself in Bethlehem walking around with the priests.

Then he attended a soccer match between a children's team in the West Bank and one in Jordan.

It was there that he gave a press conference and added politics to what could have been a pure sports event, by criticizing Israel.