Wishing fervently, as a matter of fact.  But compelled to report on what is...

The Israelis murdered in the terror attack in Bulgaria were brought home Thursday night.  There were five Israeli victims, not seven as originally thought -- as one body was that of the Bulgarian bus driver and one that of the terrorist.

A brief military ceremony was held at the airport on their arrival. 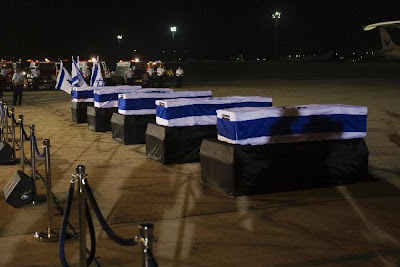 They were buried on Friday.

As is always the case, there were painful stories released regarding the victims:

There is Kochava Shriki, age 42.  After years of fertility treatments, she had just been informed that she was finally pregnant.  After telling her family, she went off joyously with her husband Yitzhak to have a vacation.  Wounded himself, Yitzhak returned with her body.

And there are two couples, good friends, who had decided to travel together.  Itzik and Gilat Colangi, who had their first baby four months ago, and Amir and Natalie Menashe, whose baby was born 10 months ago.  Now both fathers are dead, Gilat severely wounded, and Natalie lightly.

The others killed were Maor Harush and Elior Price.

What does one say?

Information regarding the terrorist or terrorists is a bit unclear, as all issues are not resolved and various versions of the situation are floating.  From the beginning PM Netanyahu said that Iran, working through its proxy Hezbollah, was responsible. And US security authorities concur.  Foreign Minister Avigdor Lieberman said last week that there is concrete evidence that Hezbollah is responsible "in close cooperation with the Iranian Revolutionary Guards." Netanyahu is pushing the issue world-wide with regard to the danger that Iran presents.

There is growing talk about a second terrorist, an accomplice.  Using eye witness descriptions, Bulgarian police have had a sketch drawn of this suspected accomplice and are circulating it -- he may have fled Bulgaria by this time.  After pulling out a wad of 500-Euro bills, he had attempted to rent a car but was turned away because his (US) identification was suspect  It was said that he spoke English with a "distinct" accent.  While some eye witnesses said he appeared to be Arab, the owner of the car rental agency declared herself sure he was of Arab origins.

What is certain is that this description does not match the appearance of the bomber on the bus, upon whom a post-mortem has been done.

But the identity of this bomber is not yet known either.  Bulgarian police have secured DNA from his fingertips and are checking it against databases.

Meanwhile, yesterday, a group that no one has heard of -- "Base of Jihad" -- issued a statement on a Lebanese news site claiming responsibility for the attack.

There are several possibilities here.  One is that a group that is not responsible claims to be. Another is that it is a front for Hezbollah, or for global jihad.

The statements from both Israeli and US sources have been sufficiently definitive regarding Hezbollah involvement, so that I will continue to assume that this group is involved.  But the "Base of Jihad" statement further complicates matters.

What makes this entire situation vastly more unsettling is the fact that the terrorist attack in Bulgaria was not a singular event.  It was simply a "success" amidst a number of attempted attacks against Israelis in various countries that have been foiled.

A series of reports compiled by intelligence analysts for the New York Police Department, and collectively referred to as "Law Enforcement Sensitive," identifies nine plots against Israelis or Jews, attributed either to Iran directly or to Hezbollah.

There have been two plots in Bangkok, capital of Thailand; and one each in New Delhi, capital of India; Tbilisi, capital of Georgia; Baku, capital of Azerbaijan; Mombasa, Kenya; and Cyprus.
The report said that through its Revolutionary Guard and Hezbollah, Iran had "sharply increased its operational tempo and its willingness to conduct terrorist attacks targeting Israeli interests and the International Jewish community worldwide."
~~~~~~~~~~
Spokesman for Prime Minister Netanyahu, Mark Regev, elaborated on this report, saying there have been more than 20 attempted attacks since May 2011 that have been thwarted by Israel, including recently in South Africa.
Israeli intelligence, while it cannot be perfect, is astounding.
~~~~~~~~~~
One of the immediate concerns of Israeli security right now is that there is intelligence of a terrorist attack planned for the Israeli athletes at the Olympics, due to begin in London on Friday.
These games mark 40 years since the terrorist massacre of Israelis in Munich.  I never felt the same about the games after that massacre, because in Munich they went on in spite of the fact that 11 participating Israelis, athletes and coaches, had been murdered  And this year Olympic authorities have declined to allow a moment of silence in their memory, in spite of a huge outcry for this.
The Shin Bet has sent security people to protect our athletes and Britain is sending 1,500 forces -- police, soldiers and private -- across London. 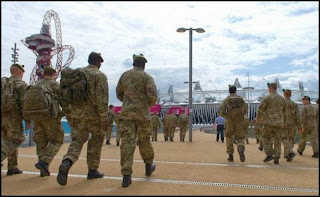 Credit: Vinienco
~~~~~~~~~~
Israel's 33 athletes are already in Olympic Village and training under tight guard.
What can I say?  They are brave.  And they face something that should not at all be on their minds as they seek to participate in an international event that is supposed to represent a spirit of peaceful competition.  May they compete stunningly well, and safely!!
Only Jews, only Israelis, have to face this sort of thing.  We are strong, there is no doubt about this  We will not be defeated. But I let down my mask of professional journalism to say that as a Jew and as an Israeli, I am mad as hell.
~~~~~~~~~~
And then there is this:
What is going on at our north, in Syria, is murderous chaos, with Assad closer to collapse since there was a major hit on Syria's defense headquarters.  His fall might or might not be a move in the right direction -- for his people, for us, and for the region, depending on what replaces his regime. Islamists would be no bargain.  The hope is that with Assad gone the link between Syria and Iran might be broken, but matters are a tad more complicated than this.
As I've written previously, a huge concern for Israel is the location of the weapons of mass destruction (gas and chemical) that Assad possesses  The worry is that these weapons might be transferred to Hezbollah, or be seized by an Islamist group such as al-Qaeda inside Syria.  Israel has been monitoring the situation closely.  Point blank, Defense Minister Ehud Barak says that Israel "will not tolerate" a movement of those weapons into the wrong hands.  This might mean a military operation -- to either destroy or seize the weapons.
~~~~~~~~~~
Enter the US, which is telling Israel not to strike Syria.  This will be a major focus of talks when U.S. Defense Secretary Leon Panetta comes to town this week.
This is what I think: The Obama administration should move its offices lock, stock and barrel to Tel Aviv, where its officials would be in range of those weapons, should they fall into the wrong hands.  Then they would perhaps have the right to advise us on what to do. But now?
There is all together too much advice handed out to us, with regard to practicing restraint.  According to at least one report, we are being told that if we go into Syria, we would risk giving Assad the opportunity to rally support against Israel.
But why should US officials assume that IDF brass would neglect to factor this into any decision that was made?  Could there, just possibly, be other reasons for restraining Israel that have to do with how the US comes out in this whole matter of Syria?  If Israel decision-makers were to be convinced that the US would do the job in Syria, as necessary, that might be another story.
See Dan Margalit on this issue: Report: US urges Israel not to strike Syrian chemical weapons
~~~~~~~~~~
With all of this, the situation in the Sinai remains hot:
First, the Egyptian-Israeli gas pipeline was blown up again. I believe this is the 15th time this has happened since 2011.
Just hours later, terrorists hiding behind sand dunes, near Eilat, fired at a bus of IDF soldiers; the bus was damaged but no one was injured.
~~~~~~~~~~
Last week I reported on the good news that Israeli Attorney General Yehuda Weinstein has declared that -- while the law must be applied with special sensitivity -- in fact Israeli law did apply to the Temple Mount, as it is in Israel.
Now from the Jordanian news agency Petra:

"The government on Friday [20 July] condemned remarks by Israel's attorney general claiming that Al Haram Al Sharif was part of Israel. Minister of State for Media Affairs and Communications and Government Spokesperson Samih Maaytah said the government rejected any Israeli attempts to assert control over Islamic holy sites in Jerusalem and undermine Jordan’s authority over them."

Good indeed that Weinstein said it.  Imperative that it be said again and again, and that the government act in accordance with this!  No backing down to make Jordan happy.
~~~~~~~~~~
Prime Minister Netanyahu has come forward with his compromise proposal, based on what was recommended by Minister of Security Affairs Moshe Yaalon, to replace the Tal Law.  Next I write, I will share information about this.
~~~~~~~~~~
But here I want to share some good news about Israel, because in light of all the above, it is imperative that we be provided with a balance.  Israel is a fantastic country, doing incredible work:

Technorati Tag: Israel and Bulgaria and Terrorism and Hezbollah.

Email ThisBlogThis!Share to TwitterShare to FacebookShare to Pinterest
Labels: Are Iran and Hezbollah Behind The Terrorist Bombing In Bulgaria, Good News From Israel