Yesterday was Tisha B'Av, the saddest day in the Jewish calendar.  (Actually, Shabbat was Tisha B'Av, but we are not permitted to mourn on Shabbat.)  It is the day that marks the destruction of the two Temples in Jerusalem and other calamities in Jewish history as well.   We fast, refrain from the wearing of leather as a sign of mourning, chant Eicha (the Book of Lamentations) and kinot (dirges referring to the Temple and other Jewish suffering).
Most often mention of Tisha B'Av brings to mind thoughts of the destruction of the Second Temple, 2,000 years ago, by the Romans. 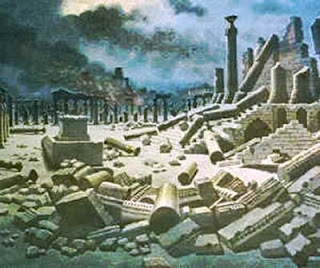 Credit: ancientworlds.net
~~~~~~~~~~
This is a tragedy in and of itself of monumental proportions, for the Temple brought the Jewish people a connection with God that transcended all others and for which the Jewish heart still yearns today.
If you are interested in understanding this better, you might want to take the time to see this fine 30- minute video, "Wake the Dawn: The Story of Jerusalem's Holy Temple":
(With thanks to Ruth N.)
~~~~~~~~~~
But more than this was lost: There was a sense of unity of the people, which most certainly has not been recovered.  There was the loss of sovereignty, and of religious legal authority via the Great Sanhedrin, the body of 71 sages who sat at the Temple.
The modern State of Israel -- with the ingathering of exiles -- is referred to as the first flowering of our redemption (reshit tz'michat ge'ulatenu).  With God's help, we are on the way.
But we have a long, long way to go, to recover our ancient glory.  And so, during Tisha B'Av we attend  lectures by rabbis addressing this issue, and we take time for contemplation.  This is both with regard to our failings of two millennia ago, which brought on the tragedy of the Churban, the destruction, and what we must do today to correct ourselves.
Focus is on increased faith and connection to God; loving kindness to fellow Jews (it was baseless hatred that helped to bring the downfall); a strong sense of ourselves, and our ability to achieve what we are intended to be; and both moral integrity and concern for the people as we live our lives and make our decisions.
All of this speaks to us loudly today.
~~~~~~~~~~
In the context of Tisha B'Av it is easy to understand the importance to the Jewish people of Har Habayit -- the Temple Mount.  To demean our connection to this place, and worse, to willingly surrender it, is to treat lightly our ancient heritage and all that we were and aspire again to be.
It is in this vein that I deplore the agreement by Israeli officials that Jews will not pray on the Mount, so as to not upset Arabs.  It is time for us to reassert our rights.
~~~~~~~~~~
I would add here one fact that I suspect many are unaware of: When we pray for the rebuilding of the Temple, we envision it as a "House of God for all peoples."  This is unique, and astounding.   We are not praying that all the world should become Jewish -- not at all.  Rather, we pray that all peoples should know God, each in their own way, and connect with the spirit of the Almighty via this House of God.
~~~~~~~~~~
While I was contemplating the meaning of Tisha B'Av yesterday, Mitt Romney was delivering a speech here in Israel, to the Jerusalem Foundation, with the walls of the Old City of Jerusalem as backdrop.
Campaign speech or not, it was astounding in what it said, and inspires hope renewed. 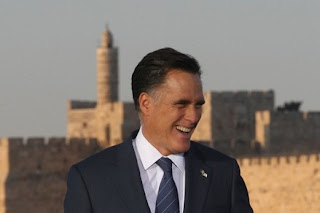 I would have to write a book to mark all the differences between what Romney said here and what Obama has stood for, going on four years now.  Undoubtedly I will return to this.  Obama visited Israel as a candidate too, although he has not been here as president.  I remember it all vividly, for his behavior was a tip-off that rang bells for me.
At about the time Obama arrived here, there had been a terrorist attack in Jerusalem. From Jerusalem  he went to Sderot, near the Gaza border, where he learned about innocent Israelis subject to rocket attacks.  Leaving Israel, he went to make a major speech in Germany, in pale imitation of John Kennedy.  In his talk he spoke about nations subject to terrorism, and he neglected to mention Israel. Ah! I thought.
Then, when he was newly inaugurated, the very first international "leader" he called was Mahmoud Abbas, president of the Palestinian Authority.  Ah! again.
And it's been downhill ever since: Obama specifically invited members of the Muslim Brotherhood to his Cairo speech.  Obama deliberately set a policy of "neutrality" with regard to Israel's differences with the PA, which permitted light between the US and Israel.  Obama was overtly rude to PM Netanyahu at the White House.  Obama set the bar for negotiations higher for Israel, by making the PA demand also his demand: the basis must be the '67 line. And the most recent incident, of just days ago: the White House spokesman refused to say Jerusalem was Israel's capital.
~~~~~~~~~~
Please my friends, share the news of Romney's speech far and wide.  Americans must understand the difference between the two candidates.
~~~~~~~~~~
© Arlene Kushner. This material is produced by Arlene Kushner, functioning as an independent journalist. Permission is granted for it to be reproduced only with proper attribution.

Technorati Tag: Israel and Mitt Romney and Obama and Election 2012.

Email ThisBlogThis!Share to TwitterShare to FacebookShare to Pinterest
Labels: Election 2012, Is Obama A Friend Of Israel?, Mitt Romney In Israel