This morning at 10.45 BST around 400 people gathered in London's Trafalgar Square at a vigil organised by the British Israel Coalition, to remember the athletes murdered by Palestinian terrorists at the 1972 Munich Olympics. The gathering was a response to the International Olympic Committee's sustained refusal to include a minute of silence in the opening ceremony due to be held tonight. 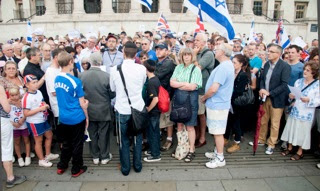 Ari Soffer, director of the British Israel Coalition said "it is shameful that the IOC has refused to hold just one minute of silence at any official Olympic event here in London. We are here today to remember the Israeli victims of this brutal attack, and to show that the Olympics must never again be allowed to be highjacked by violent murderers for their own narrow political aims." 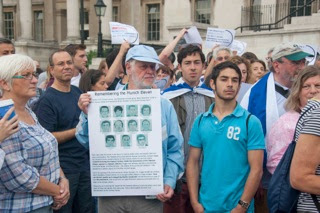 The crowd paid their respects by collectively reciting the Jewish mourning prayer, the "Kaddish", and also read out a memorial prayer listing the names of the 11 slain athletes. A minute of silence was help, as Israeli flags were lowered in respect, and the Israeli and British national anthems were sung. Organisers said they still hope the IOC will include a minute of silence in the opening ceremony. 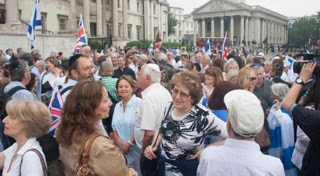 Jonathan Sacerdoti, Director of the Institute for Middle Eastern Democracy, said "by refusing the request for a minute of silence in the opening ceremony, the IOC has made far more political a statement than they ever would have by granting it. Terrorism is the enemy of everything for which the Olympics stands. If anything, the threat has got worse since the Munich attack, making it even more important that we remember it today."


Notes:
The British Israel Coalition is an umbrella organisation of pro Israel groups based in the United Kingdom. Its members are drawn from all faiths and backgrounds, including a strong Muslim contingency. It coordinates regular gatherings in London and around the UK in support of the state of Israel.