In my last posting I wrote about the Conference on the Application of Israeli Sovereignty over Judea and Samaria.  As I explained, a significant message that day, delivered by several speakers, was with regard to the need for the Jews of Israel to believe in their own rights.
"There is an absence of willingness to accept sovereignty." lamented Daphne Netanyahu.  "We must be prepared to accept our rights."
While Gershon Mesika asked, "Do we see ourselves as grasshoppers [as the spies coming out of Canaan did]"?
~~~~~~~~~~
And lo and behold!  I've encountered a whole community of grasshoppers.

They're in the US, and not Israel, it's true. But never mind. They are part of the Jewish people, or were the last time I looked.
And what are these grasshoppers doing?  They are working against acceptance of the Levy Committee findings on the legality of settlements and our right to be in Judea and Samaria.
~~~~~~~~~~
A letter has been promoted by the Israel Policy Forum and signed by some 40 individuals with some presumed claim to prominence or leadership within the Jewish community.  It has been sent to Prime Minister Netanyahu, imploring him not to accept the findings of the Levy Committee.
Why?

"We fear that if approved, this report will place the two-state solution, and the prestige of Israel as a democratic member of the international community, in peril... (Emphasis added)
"We recognize and regret that the Palestinian Authority has abdicated leadership by not returning to the negotiating table. Nonetheless, our great fear is that the Levy Report will not strengthen Israel's position in this conflict, but rather add fuel to those who seek to delegitimize Israel’s right to exist."

That's it?  Prestige in the international community?  Providing fuel for those who would delegitimize us?
They have not yet assimilated the essential fact that there is going to be no "two-state solution," that this "solution" was never viable because the Arabs do not want to share the land with us, they want us gone.
Nor do they perceive that concessions do not lead to "prestige in the international community."  Are they kidding? The international community, which has separate rules just for us, accords us next to no prestige.  Our "prestige" comes from the way in which we hold our own heads up.
Lastly, they are not concerned for Israel's legal and historical and religious rights in the land.
And with this, I say they should hang their heads in shame.
~~~~~~~~~~
I should mention, before moving to my next topic, that a representative of the Jewish Council for Public Affairs, the umbrella for Jewish Community Relations Councils, sent a letter to colleagues, advising that:

"If you believe this development [the Levy Report] could have an impact on Jewish and/or non-Jewish attitudes toward Israel, I encourage you to share this perspective with consulate officials."

You see? What matters is attitudes towards Israel, not whether Israel is doing what is fair and proper and right for Israel.  Grasshopper mentality for sure.
The American Jewish Committee is on board here, too.
They should all stop interfering with our efforts to promote the legitimate rights of our nation.
~~~~~~~~~~

My next topic is also with regard to shameful behavior.  But what I have in mind here is the behavior of Secretary of State Hillary Clinton and she's beyond shame. 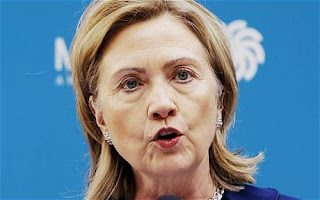 First she was in Egypt.  There, she not only met with President Morsi, but promoted this Muslim Brotherhood leader. In a thinly veiled statement, she suggested that the military pull back and allow a "civilian" administration to govern.  But the military is our best hope for stability in Egypt!  (See below as to how it may well be that the military truly is in charge.)
The Obama administration has responsibility for the downfall of Mubarak and the fact that there is a member of the Muslim Brotherhood in his place now.  You would think Obama would have learned a lesson with regard to meddling, but in fact it seems there's almost an eagerness to embrace the Brotherhood.
"We believe America’s shared strategic interests with Egypt far outnumber our differences," Clinton cooed.
~~~~~~~~~~
And then she willfully permitted an Egyptian misrepresentation of the Egyptian-Israeli peace agreement to pass.
This is what she said in an official statement (emphasis added):

"More than three decades ago, Egypt and Israel signed a treaty that has allowed a generation to grow up without knowing war. And on this foundation, we will work together to build a just, comprehensive, regional peace in the Middle East based on two states for two people with peace, security, and dignity for all."

What two states?
Well, in his statement, the foreign minister of Egypt said via an interpreter (again, emphasis added):

"I would like to add something about the peace treaty. Mr. President has repeatedly reaffirmed, and on all occasions, that Egypt continues to respect all treaties signed as long as the other party to the treaty respects the treaty itself. And today, he once again reiterated this issue and also reiterated that Egypt’s understanding of peace is that it should be comprehensive, exactly as stipulated in the treaty itself. And this also includes the Palestinians, of course, and its right to – their right have their own state on the land that was – the pre June 4th, 1967 borders (sic) with Jerusalem as its capital."

There's only one problem with this. The peace treaty with Egypt did not stipulate anything about Israel being required to grant the Palestinian Arabs a full state based on the '67 lines, with Jerusalem as its capital.  (I'll come back in due course to the exact wording of that agreement.) This is an addition by Morsi that gives him latitude to claim it is Israel that isn't honoring the treaty.
And not only did Clinton not correct this mis-statement, holding the Egyptians to their obligations according to the treaty, she parlayed this into a pitch for a Palestinian state.

Read: Disturbing absence of strong statement on honoring Egypt-Israel treaty: SECRETARY CLINTON Remarks With Egyptian Foreign Minister Amr
~~~~~~~~~~
And there's more.  Now Clinton is in Israel.  She said all sorts of obligatory things about standing strong against Iran.  But, according to  Israeli officials, she also -- are you ready?? -- pressured Netanyahu and Barak to offer incentives to the PA to bring them back to the table.
Bad enough in any event.  Breathtakingly stupid, actually.  If Abbas needs "incentives" to come to the table to discuss "peace," it means he isn't interested in peace.  Are Obama and Clinton too obtuse to notice this, or don't they really care as long as there is the semblance of "peace negotiations"?
~~~~~~~~~~
There is not the remotest evidence that Abbas wants to come to the table.  I'm reading that the US is concerned because Hamas is seen to be gaining influence in Judea and Samaria; American officials believe that if Abbas makes progress on "peace" it will enhance his standing.
But they've got it absolutely backwards.  The populace of the PA territories has been making it clear that they are not looking for peace negotiations.  They rioted when Mofaz was to come meet with Abbas. (Those riots lasted some time and some analysts believe this means Abbas is losing his grip.)
~~~~~~~~~~
With this all, comes the most stunning piece of information: What I'm reading is that Clinton wants Israel to release PA prisoners and give the PA small arms.  Let me say this again: small arms.
Read: Clinton pushes Netanyahu to apologize to Turkey, take steps to bring PA back to talks
If this is so, it is daft.  It is an outrage.
~~~~~~~~~~
This is also enormously interesting.  For I picked up this information on YNet, and, as is my practice, saved the URL so I might return to the article. But the information had been removed.
Searching the Internet, I accessed the Times of Israel article above, which did carry this information (assuming that when each of you accesses this URL it's still there).  The Times cites YNet as the original source.  I did not imagine it!
Was it removed from YNet because there had been an error, or because, as there is reason to suspect, the information, which might be considered of an "inflammatory" nature, was censored, perhaps informally?  No answers to this as yet.
~~~~~~~~~~
In any event, the notion of providing the PA with arms is grossly unreasonable.  There is a risk, at all times, of PA security forces turning their weapons on us -- there is precedent for this.
But under current conditions it is over the top.
Just four days ago, there was a report citing the outgoing commander of the Binyamin division, Col. Saar Tzur, who said that since the release of prisoners in the trade for Shalit, there has been a sharp increase in the number of attempted terror attacks.  There is a major point to be made here regarding the wisdom of doing such trades, but let's skip past that for the moment.
What Col. Tzur said, according to YNet, is that:

"...the Israel Defense Forces had to increase its activities in recent months due to the ongoing attempts between Hamas and Fatah to reach a reconciliation agreement, which has meant that the Palestinian Authority has cut down its operations against possible terrorist groups.
"Civilians don't notice it, but we're working a lot harder."

Read: Schalit deal sparks increase in terror, says IDF officer
The PA is attempting to merge with the terrorist group Hamas, and is cutting back on its operations against terrorists, and we should give the PA weapons?
There is no need to say more -- except to point out that Obama definitely does not have Israel's back.
~~~~~~~~~~
The task now is to attempt to discover what, if anything, is being covered up, and how Netanyahu and Barak will respond.
The thought occurs to me -- this is speculative -- that there might be a quid pro quo at work.  Clinton talks tough on Iran, and wants Netanyahu to provide "incentives" to the PA.
~~~~~~~~~~
I close with a fascinating, and encouraging, article by Daniel Pipes of the Middle East Forum.  He argues that:

"Morsi is not the most powerful politician in Egypt or the commander in chief. Arguably, he does not even run the Muslim Brotherhood. His job is undefined. The military could brush him aside. For the first time since 1954, Egypt's president is a secondary figure, assigned the functionary role long associated with its prime ministers.
"Mohamed Tantawi is the real ruler of Egypt. Chairman of the Supreme Council of the Armed Forces (SCAF), Field Marshall, and Minister of Defense, he serves not only as the commander in chief but also as effective head of all three Egypt's governmental branches. Tantawi is an autocrat with near-absolute powers. As chief representative of the military junta that has been ruling Egypt since February 2011, his mission is to extend the junta's rule indefinitely into the future..."

See his article for all the evidence, including pictorial evidence, that he provides:

Egypt's Real Ruler: Mohamed Tantawi
~~~~~~~~~~
© Arlene Kushner. This material is produced by Arlene Kushner, functioning as an independent journalist. Permission is granted for it to be reproduced only with proper attribution.