In 2001, she [Amira Hass] was found guilty in court of libel for presenting a false account of Hebron Jews kicking, spitting on and dancing around the corpse of a Palestinian shot by border police. Unfortunately for Hass, closed circuit television footage and a police investigation exposed her story as a lie, and she was ordered to pay 250,000 NIS in damages to the Jewish community.
CAMERA, Amira Hass Spouts Vitriol on the CBC, June 29, 2011 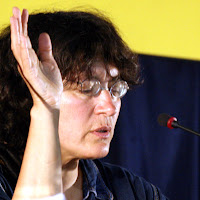 Leave it to Amira Hass and her special brand of sloppy journalism to promote her claim that throwing stones at Jews has now attained the level of an Arab "birthright" and "metaphor of resistance." In her article The inner syntax of Palestinian stone-throwing, published by Haaretz (also known for its shoddy reporting: see CAMERA for a long list of Haaretz errors), Hass writes:

Throwing stones is the birthright and duty of anyone subject to foreign rule. Throwing stones is an action as well as a metaphor of resistance. Persecution of stone-throwers, including 8-year-old children, is an inseparable part − though it’s not always spelled out − of the job requirements of the foreign ruler, no less than shooting, torture, land theft, restrictions on movement, and the unequal distribution of water sources.

...Often hurling stones is borne of boredom, excessive hormones, mimicry, boastfulness and competition. But in the inner syntax of the relationship between the occupier and the occupied, stone-throwing is the adjective attached to the subject of “We’ve had enough of you, occupiers.”

This is not reporting.
Amira Hass is merely using her article as a platform to promote her own anti-Israel ideology.

In fact, Muslims actually have a long history of stoning Jews that predates the re-establishment of the state of Israel, when the Arabs played host to Jews.
Andrew Bostom gives other examples in The Legacy of Islamic Antisemitism: From Sacred Texts to Solemn History

As if Arab attacks on innocent civilians could ever be properly construed as 'resistance'.