Arlene Kushner on Latest Events About and In Response To Iran

I will not here have comment about the terrorist attack in Boston and subsequent events at MIT -- even as I am watching it all closely (actually having relatives in and near Boston myself). The story is unfolding as I write, and comments now would be premature.
~~~~~~~~~~
I recently wrote about Salam Fayyad's resignation as prime minister of the PA, citing several analysts who indicated quite clearly what a negative omen this was for Oslo, for "the peace process," and all the rest.  I wondered, as I wrote, how the Obama administration would respond to this.
Would there be sufficient comprehension of the implications of the situation so that attempts to push "peace" would be put on a back burner?
Well, I have my answer now.
How foolish I was to even ponder such a question.
On Wednesday, Secretary of State Kerry spoke before the House Foreign Affairs Committee, and told them that peace must be reached between Israel and the PA within the next two years -- that's the window of opportunity he sees before it's too late.  While he was in this region, he explained, he sensed a "seriousness of purpose" on the part of both Israeli and PA leaders with regard to negotiations.
As a friend of mine sometimes says:  "What planet is he from?"
~~~~~~~~~~
And then we've got the Obama approach to Syria.
The unease about jihadist rebels -- most notably al-Qaeda -- taking over is now being reflected in American policy.  According to latest reports, the Obama administration is no longer eager for a rebel victory -- something it had been working towards.
Citing a Wall Street Journal report, Algemeiner says (emphasis added):

"...[US] officials fear that the increasing Islamist influence means a victory would undercut hopes for finding a diplomatic solution. It would also shatter national institutions along with what remains of civil order, increasing the danger that Syrian chemical weapons will be used or transferred to terrorists.

"The White House has drawn up elaborate plans for a post-Assad Syria that includes an orderly political transition that keeps the country together and preserves Western interests..."

Read: Report: Obama Administration Not Keen On Syrian Rebel Victory Right Now
It's the bit about "elaborate plans" drawn up at the White House that caused me to do a double take.  Precisely why do Obama's people imagine that they have the sort of influence that would allow (the "right") rebels, having defeated Assad, to proceed precisely according to an American vision of the situation??  It's this sort of expectation that has gotten Obama into so much trouble on the international scene -- he seems to have very little capacity to understand that other people don't necessarily see it his way.
Unreal, indeed.
~~~~~~~~~~
And there's more from that great American diplomat, Kerry.  On Thursday he spoke to the Senate Foreign Relations Committee.  He admitted that there was frustration over the failure of recent talks with Iran.  However he believes a diplomatic solution is still the best option, and counseled patience:


"We don't need to spin this up at this point in time."

Read: Kerry disappointed by recent talks with Iran
~~~~~~~~~~
Then we have the paper -- "Strategic options for Iran: Balancing pressure with diplomacy" -- put out by a group of Americans who call themselves the Iran Project.  Says the paper (emphasis added):

[US policies] "may have narrowed the options for dealing with Iran by hardening the regime's resistance to pressure… it seems doubtful that pressure alone will change the decision of Iran's leaders… A strengthened diplomatic track that includes the promise of sanctions relief in exchange for verifiable cooperation could help to end the standoff and produce a nuclear deal."

By admitting that pressure alone will not change Iran's leaders, they actually make the case for military action or at least a credible military threat, but then back off in the opposite direction: We haven't been nice enough to Iran.
A group of former senior administration officials -- including several recently resigned from the Obama government, who might reflect the administration view but don't speak for Obama -- have written a letter supporting this paper.
Read: Former top US officials: Lift Iran sanctions
~~~~~~~~~~
At this point I would be tempted to bang my head against the wall, except for the fact that I'm writing as an Israeli, and my own head of state has a very different view of matters.
Prime Minister Netanyahu gave an interview to BBC yesterday.  Iran, he said, is 80 kg. short of the 250 kg. of 20% enriched uranium needed for making a nuclear bomb.

"Without a direct military threat, Iran will not stop. (emphasis added)

"Israel's right to defend its existence is not subject to a traffic light.   We don't need anyone to give us the right to prevent a new Holocaust."

Read: PM: Israel's self-defense not open for debate
~~~~~~~~~~
In addition, there is other significant news:
According to a NYTimes report, the US Department of Defense is close to finalizing a $10 billion arms deal with Israel, that would permit Israel to purchase from American contractors the KC-135 refueling tanker planes, "antiradiation" missiles that target air-defense radars, new advanced radars for jets and the cutting-edge V-22 Osprey aircraft.  Israel's would be the first foreign military to purchase this aircraft.
Pictured here, it is a multi-mission, military, tiltrotor troop transport aircraft: it takes off and lands like a helicopter, but once airborne, its engine can be rotated to convert it to a turboprop airplane capable of high-speed, high-altitude flight. Its bellygun rotates 360 degrees and can fire 3,000 rounds/minute. 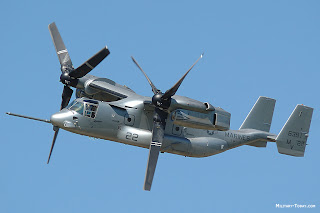 Credit: Military-today
~~~~~~~~~~
The report speaks of providing Israel with armaments to bolster defense against Iranian threats.  What it sure looks like is that the US administration officials are playing a two-pronged game.  One the one hand letting Iran know that they intend only benign interaction with Iran (translation: See, we're not threatening you), while simultaneously increasing Israel's capability to respond to Iran more realistically and effectively.
This seems an unofficial nod to what our prime minister is saying with regard to our right to defend ourselves as necessary.  Letting us take care of matters.
The armaments described would be very useful in an attack on Iran -- refueling planes, ability to target radar effectively, etc. What I do not see, however, is any mention of the sale or provision to Israel of those 30,000 pound bunker-busters that can really do the job on nuclear facilities hidden deep in the ground -- unless this will be done quietly.  I regret that this does not seem to be part of the package.
Secretary of Defense Chuck Hagel is due here next week and is expected to finalize arrangements.  Whatever the vast unease about him prior to his assuming his post, this is good news.  I am not suggesting that he is in any way the promoter of this deal -- this, undoubtedly, comes from the Pentagon, which is solidly pro-Israel.  But he doesn't seem to be blocking it.
~~~~~~~~~~
There is yet more to the story, however:
United Arab Emirates are going to be permitted to purchase 26 F-16 warplanes, along with precision missiles to be launched from these planes. And Saudi Arabia would purchase the same precision missiles.
Whenever Arab states acquire advanced armaments there is room for unease.  Reportedly, the US has "assured" Israel that the use of these missiles will be "monitored."  I consider this worthless, as assurance.  But the dynamic has changed.  UAE and Saudi Arabia are genuinely frightened, and actually eager for Israel action against Iran. Over time there have even been several reports about very quiet assistance the Saudis might provide to Israel during an attack on Iran.  Attacking Israel simply is not the focus of Saudi or UAE concerns.
Their leaders have been more than a little angry at the US for not taking a stronger position against Iran.  Here it seems that they're been appeased. Says a US official:


[The armaments are being provided are] "also to boost the capabilities of our Persian Gulf partners so they, too, would be able to address the Iranian threat."

Read: Report: Israel, UAE, Saudis in huge US arms deal
~~~~~~~~~~
© Arlene Kushner. This material is produced by Arlene Kushner, functioning as an independent journalist. Permission is granted for it to be reproduced only with proper attribution.
If it is reproduced and emphasis is added, the fact that it has been added must be noted.


Technorati Tag: Iran and John Kerry and Syria and Obama.