Officer Krupke, you're really a square;
This boy don't need a judge, he needs an analyst's care!
It's just his neurosis that oughta be curbed.
He's psychologic'ly disturbed!

DIESEL: (As Judge) In the opinion on this court, this child is depraved on account he ain't had a normal home. 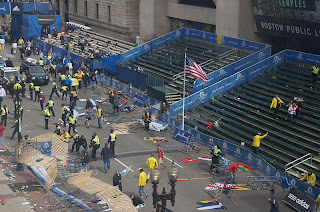 Stephen Carter of Yale University writes about Boston and the Terrible Theater of Terrorism, establishing what would appear to be the standard response to this -- and any -- terrorist attack:


When attacked, we want not simply justice but revenge. In this sense much of the drama of terrorism and response had become highly stylized. This isn't the 1960s, the era of hand-wringing and excuses. If you blow up, by design, innocent civilians, no one will ask why or be interested in your cause. The conversation will be about bringing justice to the enemy. And if you invent an ideology in which nobody is innocent, the West will turn against you in fury, and make no protest as American drones rain missiles upon wherever the president of the United States thinks you might possibly be hiding. [emphasis added]

In his original comments Obama wanted to know why the Boston Marathon bombing happened:


We still do not know who did this or why. And people shouldn’t jump to conclusions before we have all the facts. But make no mistake — we will get to the bottom of this. And we will find out who did this; we’ll find out why they did this. Any responsible individuals, any responsible groups will feel the full weight of justice.

Obama made clear there would be justice, but 'why' it happened was also important. Not everyone was happy to see that comment in Obama's speech because it seems to leave an opening -- a reason to possibly excuse the perpetrators for what they did.

And that seems to be hinted at by what one leader seems to be saying. In Canada, the new head of Canada’s Liberal Party, Justin Trudeau, empathizes with the Boston Marathon terrorists:


We have to look at the root causes. Now, we don’t know now if it was terrorism or a single crazy or a domestic issue or a foreign issue. But there is no question that this happened because there is someone who feels completely excluded. Completely at war with innocents. At war with a society. And our approach has to be, okay, where do those tensions come from?

His statement is in sharp contrast with Canadian Prime Minister Stephen Harper, who unequivocally demanded justice:


“When you see this type of violent act, you do not sit around trying to rationalize it or make excuses for it or figure out its root causes,” Harper told reporters. “You condemn it categorically, and to the extent you can deal with the perpetrators, you deal with them as harshly as possible.”

The most extreme approach of empathy is exemplified by Jenna Karvunidis who asks Were the Boston attacks in retaliation for racism against Muslims?:


Could the Boston bombings been related to the anti-Muslim racism experienced by the bombers' brother? The world is a confusing place to navigate when you're a teenager and Dzhokhar Tsarnaev, who goes by the nickname, "Djohar" is just 19 years old. This is what happens when we treat each other like crap, guys. While the guilty Tsarnaev brothers are responsible for their heinous crimes, bombers aren't created in a vacuum. People who do these horrendous things are a product of a society that molds them.

Be kind to each other.

This reminds one of the excuses made last year for Mohammed Merah last year, when he murdered French police and Jews?

Here, the issue is not terrorists and their personal issues, but rather Muslim terrorists in particular -- and to some degree society itself is indirectly responsible for not trying a little tenderness.

Karvunidis' simplistic approach overlooks the fact that it may have been a 'society' of Muslim extremists who turned the Tsarnaev's -- or the radical Islamist ideology contained in material that is readily available.

She clearly says that the Tsarnaev's are responsible for what they did, but she seems to be claiming that some of us are badly in need of some sensitivity training.

The pundits will have a field day, offering opinions and insights all along this spectrum.
Something for everyone.

But at the end of the day, what are we going to make of what happened -- of how it came to happen and how it can be prevented in the future?

According to The Daily Caller, The New York Times headline was originally: 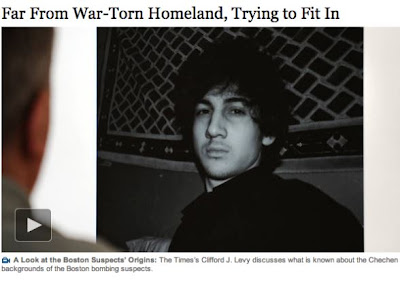 Later, it was changed to: 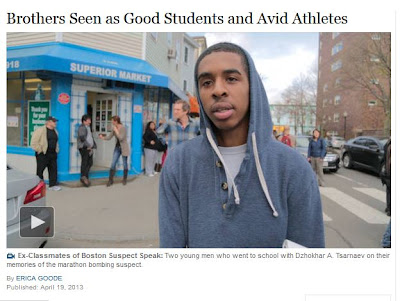