Evelyn Gordon writes about How UNRWA Steals Money from Those Who Need It Most:


The UN High Commissioner for Refugees is threatening to end relief operations for Syrian refugees, who currently number 1.3 million and counting, if it doesn’t receive the necessary funds soon. The agency says it has received only a third of the $1 billion it needs through June, and only $400 million of the $1.5 billion donors pledged earlier this year. UN Secretary-General Ban Ki-moon has warned explicitly that absent more funds, UNHCR will have to stop distributing food to refugees in Lebanon next month. And Jordan, which has the largest population of Syrian refugees, is threatening to close its borders to new entrants unless more aid is forthcoming urgently. 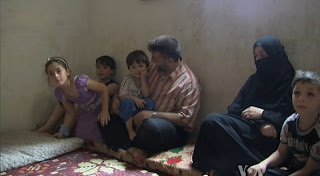 Unlike The UN High Commissioner for Refugees, which is threatening to end relief operations for Syrian refugees due to lack of funding, UNRWA has no problem providing benefits to Palestinian Arabs beyond what refugees normally receive:

The UN allows this discrepancy is allowed to exist, despite the fact that real Syrian refugees are truly suffering -- facing the loss of things as basic as food and fresh water.

Meanwhile, UNRWA goes even further, educating Palestinian Arabs with textbooks from the Palestinians themselves, thus helping to raise a new generation of Arab children filled with hate for Jews and Israelis -- as this video illustrates with a look at what goes on inside UNRWA classrooms:


Thus, anyone who claims to have a shred of genuine humanitarian concern ought to be agitating for UNRWA’s abolition and the Palestinians’ transfer to UNHCR’s auspices. Unfortunately for the Syrians, it seems that many of the world’s self-proclaimed humanitarians prefer harming Israel to helping those who need it most.


She has a point.