Not only does Kerry imply a comparison between Israel on the one hand and the Boston Marathon bombing terrorists -- he also compares the victims of the Tsarnaev brothers with those killed aboard the Mavi Marmara, when in fact the Turks killed on the Mavi Marmara were members of the terrorist associated IHH 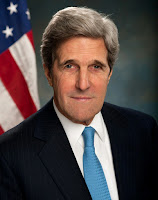 Mr. Kerry said he understood the anger and frustration of those Turks who lost friends and family in the raid. Mr. Kerry, a former Massachusetts senator, said last week’s Boston Marathon bombings made him acutely aware of the emotions involved.

“We have just been through the week of Boston, and I have deep feelings for what happens when you have violence, when something that happens when you lose people that are near and dear to you,” he said. “It affects the community; it affects the country. But going forward, you know, we have to find the best way to bring people together and undo these tensions and undo these stereotypes and try to make peace.”

So besides spitting in the eye of Israel in order to gain points with Turkey, is Kerry saying that this past week's terrorist attack in Boston should inspire Americans to make peace with the Islamist extremists who have declared themselves dedicated to destroying the Great Satan that is the US?

Kerry has come up with a mixed metaphor that not only insults Israel, which is after all an ally, but also has implications about US policy that are less than comforting.