The Boston Marathon Bombing: A Call To Action or A Sign of Things To Come?

At issue is how Tamerlan and Dzokhar Tsarnaev seemed to suddenly become radical Islamist terrorists.

The cause, Rubin notes, is the prolific amount of revolutionary Islamist propaganda available:


There are literally hundreds of Internet sites, videos, preachers, books, and everything else you can think of that promote revolutionary Islamism. They tell Muslims that they should and must be revolutionaries and terrorists; they cite holy works to do so.

The problem then is the lack of anything to counteract this:

Rubin enumerates 6 problems that interfere with the establishment of programs along the lines of what was done during the Cold War when, despite the better funding and organization of the Soviets and their supporters, the US government and non-governmental organizations took action.


the ability to critique precisely what is radical in Islam and what is wrong with Islamism is handicapped by the successful effort to brand any attempts at making such distinctions as “Islamophobia” instead of a sensible fear of revolutionary Islamism. It is equivalent to branding any such attempt to critique Communism as anti-Sovietism or as a mindless antagonism to liberalism or pure reactionary views. Communists tried such techniques but they only worked to a very limited extent.

At issue is whether the Boston Marathon bombing will become a call to action -- or a sign of things to come. 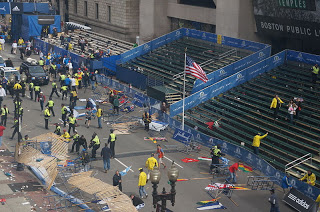