A miracle.
I am writing on Yom HaShoah. And what I see, as clear as clear can be -- juxtaposed against the pain beyond imaging of the various stories of survivors -- is that the resilience of the Jewish people is a miracle.  Our people, decimated,    embraced life and rose up again to great heights.  Not just to survive.  But to better the world via medicine and technology and culture.  Out of the horror -- the inhumanity and obscenity -- blessing upon blessing.
Beyond a shadow of a doubt, the State of Israel is a nes.
~~~~~~~~~~
But the world does not receive Jewish miracles kindly.
Which is why today there are existential threats to our nation, and our legitimacy is questioned.

In 2012 there was a 30% increase in world-wide anti-Semitic incidents over the year before.  Hungary is considered particularly problematic, with Greece and the Ukraine not far behind.  All are seeing the rise of far-right and neo-Nazi parties.
Read: Study: Global anti-Semitism rises by 30 percent
And France?  It had a 58% increase, in the wake of the Toulouse terror attack.  Imagine this.  School children and their teacher were shot down, just because they were Jews.  But this horrendous incident, instead of promoting remorse and reactions against overt anti-Semitism, seems to have "inspired" other incidents, somehow validating the permissibility of further hatred.
~~~~~~~~~~
During the Yom HaShoah ceremonies at Yad VeShem, which I watched on TV last night, there was an IDF honor guard that presented arms. (Picture below is of a previous year's ceremony.) 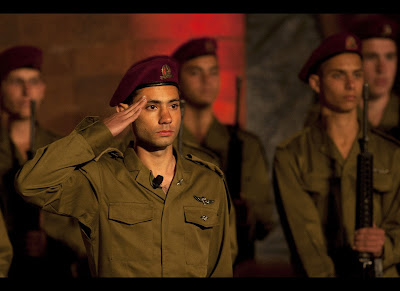 ~~~~~~~~~~
Prime Minister Netanyahu, during his address at the ceremony, said:

"In each generation they rise up to destroy us...

Read: PM: I Promise There Will Never be Another Holocaust

Credit: Flash90
~~~~~~~~~~
And so, we are faced with incredible challenges.
There are matters far more challenging to deal with -- Iran, Syria, etc. -- but right now we've got Secretary of State John Kerry here.  Kerry subscribes to the "pretend it's so and  people will believe it is" school of thought.
He started in Turkey yesterday, and his statements during a press conference with Turkish Foreign Minister Ahmet Davutoglu had Israeli jaws dropping.  For he praised Turkey for its "sensitivity" in responding to the Israeli apology: "They have taken steps to try to prevent any sense of triumphalism."
But Turkish Prime Minister Erdogan has done nothing but gloat.  Billboards were even put up by the Ankara municipality that had the words, "Israel apologized to Turkey.  Dear prime minister, we are grateful that you let our country experience this pride," superimposed over a picture of Erdogan, looking forward with confidence.
~~~~~~~~~~
Kerry suggested to the Turks that good relations with Israel should be speedily restored:


"We would like to see this relationship that is...critical to the peace process ... get back on track in its full measure."


"There is an offense that has been committed and there needs to be accountability,"  Thus Turkey would proceed with a "careful" advance.

"All of the embargos (read, naval blockade of Gaza) should be eliminated once and for all," he said.

I have no idea what Kerry promised them privately, but publicly Turkish officials let it be known that they were seeking a role in "the peace process."  This possibility has been soundly rejected by Israel. And, as it happens, the PA is not particularly keen about it either: Erdogan has been too chummy with Hamas to suit them.
~~~~~~~~~~
From that rousing success, Kerry flew into Israel late yesterday and went directly to Ramallah to encourage Abbas to come back to the negotiating table.
Abbas made the demands we've already heard: Before he will come to the table, he wants a freeze on all building in Judea and Samaria and eastern Jerusalem, and release of all prisoners.
But there were some new demands as well.
According to the independent Palestinian Arab news agency, Maan, Abbas' political advisor, Nimr Hammad, says Abbas "wants to know, through a map to be presented by Benjamin Netanyahu to Kerry, what the prime minister's view of a two-state solution would be, especially the borders."
Read: Abbas tells Kerry: We are committed to peace
~~~~~~~~~~
According to Khaled Abu Toameh and Herb Keinon writing in the JPost, Abbas also wants Israel to hand over parts of Area C to the PA.
Read: Kerry in another bid to get Israel, PA to talk
The Oslo Accords divided Judea and Samaria into Area A, fully administered by the PA; Area B, which has PA civil administration and Israeli security administration; and Area C, fully administered by Israel.
~~~~~~~~~~
Cute set of demands, is it not?  But Abbas knows what he's about.  He does not expect Israel to make these concessions as part of that on-going, US-promoted effort to bring him to the negotiating table.  Rather, he anticipates that Israel will not be forthcoming and expects to use Israel's refusal as an excuse to not come to the table.
Abbas is not about to negotiate in good faith with Israel.  There is no way he could -- even IF he wanted to -- and remain viable.
If Kerry had half a brain in his head, and some readiness to grapple with reality, he'd pack his bags, and go home to tell Obama, "Boss, it's not gonna fly, let's concentrate on other things."  But, this does not seem likely to happen.
~~~~~~~~~~
A note here: Two other sources I've encountered (and which you may see as well) are saying that it was Kerry's suggestion that part of Area C be transferred to the PA.  But I have checked it out and believe that the JPost version is correct.  This information came via a top PA official. [emphasis mine]
I can imagine that once Abbas made this demand, Kerry may well have run with it, with enthusiasm.
~~~~~~~~~~
A Ma'ariv report, cited by Israel National News, says that:

"Justice Minister Tzipi Livni, who is also in charge of negotiations with the Palestinian Authority, is going behind Prime Minister Netanyahu's back and expressing positions that undermine his conditions for negotiations...

"Livni has shown willingness to retreat from Netanyahu's position, that in order for negotiations to begin, the Palestinian Authority (PA) must accept that Israel has a right to exist as the Jewish state.

"The newspaper quoted a Western source who is well-versed in the diplomatic contacts as saying that Livni 'has become convinced that Israel's insistence on this condition could prevent the resumption of negotiations, and did not rule out the position presented to her, according to which the most Israel can receive from Abu Mazen is a recognition of the solution of two states for two peoples.'"

Read: Report: Livni Undermining Netanyahu on Recognition
~~~~~~~~~~
I share this here, but the report is not verified and remains hearsay. [emphasis mine] While I do not have any trouble believing Livni would take this position, it's important to keep in mind that, as negotiator, she does not function unilaterally, and still answers to the prime minister and a negotiating committee that includes Moshe Ya'alon and Naftali Bennett.
Israel National News says that Livni would not be permitted to negotiate without Netanyahu representative Attorney Yitzchak Molcho present; I had understood, even more, that as part of coalition negotiations it was agreed that Bennett and a representative of Yair Lapid would also be present.
Of course Abbas finds the concept of Israel as a Jewish state unacceptable.  In fact, the inability to accept a Jewish state on what had been "Muslim" land has been the major stumbling block to genuine progress in negotiations.  The Palestinian Arabs could have had their state, over and over again  -- and yet shy away from it.
That we are a Jewish state is an issue of major importance.  We are not a bi-national democracy, which can be swallowed up by Arab Muslims.
~~~~~~~~~~
The good news is that Israeli diplomats are saying that Israel is not going to give Kerry a list of Israeli concessions to the PA.
According to Times of Israel: "The gaps between the sides are too big, sources close to Netanyahu were quoted as saying by the Hebrew daily [Yediot Ahronot]. Any concession Israel makes now would only harm it in the future"
Read: Jerusalem won’t hand Kerry list of concessions
May this be an accurate report and may Netanyahu's spine stay strong.
~~~~~~~~~~
Because silence is unacceptable, I share this (with thanks to Dan. F.):  Cardozo Law School will be honoring Jimmy Carter on Wednesday.  To protest and demand the cancellation of the event, see this site put up by concerned Cardozo alumni:
See: Shame on Cardozo for Honoring Jimmy Carter!
~~~~~~~~~~
As Yom HaShoah winds down, here in Israel, I will close this posting with some photographs.  They are from a collection of 20 photos found on http://popchassid.com/photos-holocaust-narrative/ and I discovered them via Janglo.
What makes them special is that they carry forward my theme, above, of the resilience of the Jewish people.  Magnificent, they document the sprit of life, and the miracle.
Never to forget, but oh! rejoice that we live.
~~~~~~~~~~


Technorati Tag: Israel and John Kerry and Holocaust and Palestinians.