Is It Time To Start Offering Chess To Second Graders As A Compulsory Class?

Deutsche Welle posted on YouTube about Armenia, where Chess has become a compulsory subject, starting in second grade:


Armenia is a country facing many problems. Its ceasefire with neighboring Azerbaijan is rocky, and its economy is struggling. Now Armenia is hoping chess could help improve its fortunes. Armenian schools are introducing chess as a compulsory subject. The idea comes from chess Grandmaster Smbat Lputian, who founded a chess academy in Yerevan. The game is said to hone analytical skills and improve memory and concentration. Lputian says that could help children in other subjects too. And he's convinced that a country of chess players is capable of many achievements.

Alex Berezow writes in The Pacific Standard about Armenia's idea, going so far as to explain Why Chess Should Be Required in U.S. Schools:


Indeed, the Armenians may be on to something. One recent psychology study found that chess was associated with greater “cognitive abilities, coping and problem-solving capacity, and even socioaffective development of children.” Of course, because it was a cohort (observational) study, the link could be due to some third factor or the possibility that smart, mature children are more inclined to play chess in the first place.

In the above video, the math/chess teacher says, “Chess trains logical thinking. It teaches how to make decisions, trains memory, strengthens will power, motivates children to win, and teaches them how to deal with defeat. It’s the only school subject that can do all of this.” 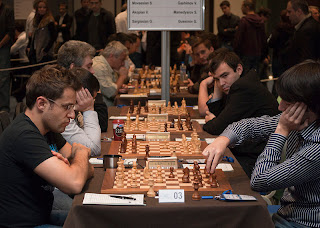 While chess is offered as a subject in some schools in the US, the US government could be more supportive, like Armenia::

“We don’t have to worry about money,” said Petrosian, “although we have corporate sponsors for some events, it’s mainly the state that supports and helps us out.”

That sounds like something that could be right up Obama's alley...