The Media Still Ignores The Consequences of Palestinian Rock-Throwing

Anav Silverman writes A Rock is a Bullet: The Consequences of Palestinian Rock-Throwing, telling the story of a seven-month old infant hit in the head by a rock thrown by a Palestinian Arab -- and the consequences 23 years later:
For over 25 years, Palestinian rock-throwing has become a part of routine life for Jewish residents living in Judea and Samaria. On the roads to the settlement communities, many of the 300,000 residents living in the scenic region have experienced some kind of rock attack on their vehicle. While there has been much debate about the political significance of a Palestinian rock thrower by outside media observers and political commentators, for residents impacted by such rock attacks, the rock is simply seen as lethal.

For Ahikam Simantov from Ofra, a community established in 1975 on the main road between Jerusalem and Nablus, a rock thrown at his family’s car forever changed his life 23 years ago. On May 1990, after celebrating Jerusalem Day in the country’s capital, the Simantov family was driving back home to Ofra when rocks began pelting their car along the way. One rock smashed through the car window, hitting Ahikam’s head, who was seven-months-old at the time. 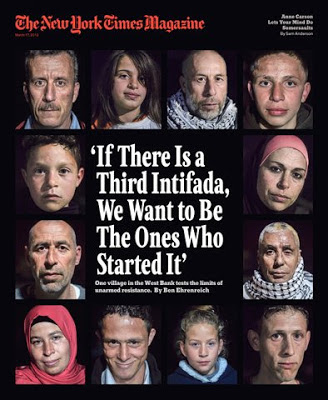 and Haaretz goes so far as to defend Arabs throwing rocks at innocent civilians, the cases of victims of Arab violence continues.


The most recent Palestinian rock-throwing incident that left a child critically injured took place three weeks ago in Samaria near Ariel. Palestinian teens threw rocks at a vehicle driven by 32-year-old mother, Adva Biton, whose three-year-old girl, Adele was critically injured, and her two older sisters, moderately injured, when a stone struck their vehicle in Samaria on Thursday night, March 14. Adele, who is still unconscious, has been fighting for her life in an Israeli hospital for the past three weeks.

But stories like these do not make it to the front cover of the New York Times, which recently rejected a letter to the editor written by the mother whose daughter was murdered in the second Intifada.


Technorati Tag: Israel and Palestinians and Intifada and Media Bias.