Fareed Zakaria: Since When Are Media Journalists Entitled To Make Up Their Own Facts?

Everyone is entitled to his own opinion, but not to his own facts.
Daniel Patrick Moynihan

For most people, perhaps -- but are journalists entitled to both?

That is the question raised by a comment by "opinion writer" Fareed Zakaria who wrote in Obama appeals to Israel's conscience that:


After all, Israel has ruled millions of Palestinians without offering them citizenship or a state for 40 years. 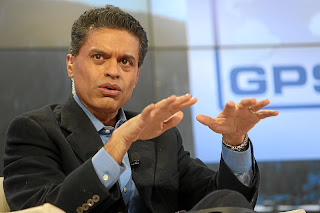 Of course, as well known to Zakaria, Israeli prime ministers Barak and Olmert offered Arafat and Abbas an independent state along the 1967 lines with agreed upon land swaps, and Olmert even offered Palestinian control of east Jerusalem. Arafat and Abbas refused.

In No Accountability for Zakaria’s Fiction, Jonathan Tobin expands on Grossman's point:


As anyone who has paid even cursory attention to the conflict in the last generation, this is patently false.

Israel Prime Minister Ehud Barak offered the Palestinians statehood and independence in almost all of the West Bank, Gaza and a share of Jerusalem in July 2000 at Camp David. Yasir Arafat refused it to the chagrin of President Bill Clinton, who thought the offer would win him the Nobel Peace Prize he coveted. The Israelis repeated the offer the following January at Taba with advantages and got the same answer. In 2008, Prime Minister Ehud Olmert made an even more generous offer of statehood that gave the putative state of Palestine even more territory. Arafat’s successor Mahmoud Abbas fled the talks rather than be forced to give an answer.

One may argue that Israel’s offers were insufficient, even though doing so means taking a position that goes far beyond the parameters for peace that President Obama has endorsed and which would compromise Israeli security as well as its rights. Anti-Zionists can say that an offer of separate Palestinian statehood that requires them to recognize the legitimacy of a Jewish state no matter where its borders are drawn is unreasonable. But you can’t claim that Israel hasn’t made any offers of statehood and retain credibility.

Unless, that is, your name is Fareed Zakaria.

The problem is not merely Zakaria's baseless claim, and his failure to admit to it and correct it -- it is the manner in which The Washington Post supports Zakaria.

In his response to Grossman, Fred Hiatt, editorial page editor of The Washington Post, replies:

The history of negotiations between Israel and the Palestinians is contentious and, as I’m sure you know, subject to widely differing interpretation. Mr. Zakaria’s statement is within the bounds of acceptable interpretation for an opinion columnist.

Thank you for your interest.


"The history of negotiations between Israel and the Palestinians is contentious and, as I'm sure you know, subject to widely differing interpretation"? You don't say! Yes, I can indeed accept this vacuous platitude.

But "Mr. Zakaria's statement is within the bounds of acceptable interpretation for an opinion columnist"? Even the Palestinians are not contending that Israel did not offer them "a state for 40 years." Perhaps it can be claimed that Israeli offers did not meet Palestinian requirements or expectations, but no one - I repeat no one - can claim that offers were not made.

Is this what journalism has sunk to?


During the segment, correspondent Bob Simon stated that the security fence “completely surrounds Bethlehem, turning the ‘little town' where Christ was born into what its residents call ‘an open air prison.’”

The problem of course is that Bethlehem is not surrounded on all sides by the security fence -- in fact it is located to the north and west of Bethlehem, leaving the rest of the city open to the West Bank.

Yet recently Jeff Fager, chairman of CBS News, gave a talk and repeated the error -- going so far as to accuse CAMERA, which criticized 60 Minutes, of being the ones who have their facts wrong.

Calling his bluff, Van Zile challenged Fager that if he in fact could prove that the security fence completely surrounds Bethlehem Van Zile would donate $5,000 to a charity of Fager's choosing.

Fager has yet to respond to Van Zile's challenge.
What are the chances of Hiat and Zakaria coming clean?

Or does the media really think they are entitled to make up their own facts?