Bulgarian police officers last summer arrested a Canadian citizen linked to the Iranian government who engaged in surveillance of the local Chabad center in the capital of Sofia, a well-placed and reliable local source told The Jerusalem Post last week, on condition of anonymity due to security reasons.

An Iranian-sponsored female agent in her 50s, holding a Canadian passport, traveled from Istanbul to Sofia several weeks after the bombing of the Israeli tour bus in the Black Sea resort town of Burgas in July 2012. She was arrested on her first day in Sofia after the Bulgarian police, on high alert, noticed she was monitoring the Chabad center.

Bulgaria has already found Hezbollah to be responsible for last years terrorist attack in its country -- and as a puppet of the Iranian regime, Hezbollah does nothing without the approval of Iran. 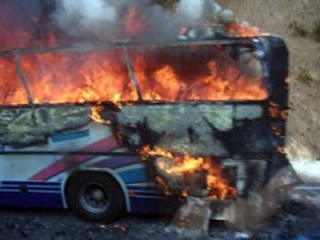 The question is what is so special about Bulgaria that would lead Iran to want to launch another terrorist attack against Israel inside the same country?

Maybe because Iran thinks its so easy:


Dr. Matthew Levitt, director of the Stein Program on Counterterrorism and Intelligence at The Washington Institute for Near East Policy, and a leading authority on Hezbollah’s global terror operations, told the Post that, “It would not surprise [us] if Iran or Hezbollah were found to be behind this plot [against the Chabad center] last year. Recall that five years earlier Western intelligence indicated that ‘Hezbollah chiefs and Iranian intelligence officials had put Bulgaria on a list of nations propitious for developing plots against Western targets.’ “Their first attempt at killing Israeli tourists failed when a suspicious package was noticed on a bus carrying Israeli tourists from Turkey to Bulgaria in January 2012. Six months later Hezbollah operatives struck again, this time with devastating success in Burgas.” [emphasis added]

In light of Iran's continued interest in carrying out terrorist attacks in Europe -- and using Hezbollah to carry out those attacks -- Europe in general, and France and Germany in particular, should take Hezbollah terrorist attacks more seriously and put them on the list of known terrorist groups as soon as possible.


Technorati Tag: Israel and Iran and Bulgaria and Hezbollah.