It doesn’t matter whether Tamerlan or Dzhokhar Tsarnaev ever took the usual American school trip to the United Nations. The poisonous ideology of Islamic countries that is continually broadcast unimpeded from the UN’s global stage is ubiquitous.
Anne Bayefsky

Expect many to try to explain why the Boston Marathon bombing happened.

But according to Anne Bayefsky: "Why" Boston Terror? Try the UN:

At exactly the same time that the Tsarnaev brothers were building their bombs and planning their attack, Islamic front men at the UN were demanding that the organization define terrorism with an exception clause for “legitimate struggle.”

In 2013 the United Nations still has no definition of terrorism. For over a decade, a committee involving all UN states has been charged with drafting a so-called comprehensive convention against terrorism and producing a definition. But yearafter-year the effort is thwarted by Islamic countries that want no legal impediments to murder in the name of “self-determination” or national liberation.”

Indeed, Muslim countries and their pawns at the UN would justify the murder of Jewish civilians as part of some sort of "legitimate struggle" against a colonial occupation, claiming that the key is to examine the "root causes" of terrorism in economic and political injustice.

This is the poison of the UN -- and to see it in action, one need look no further than the Secretary of the UN himself, Ban Ki-Moon. 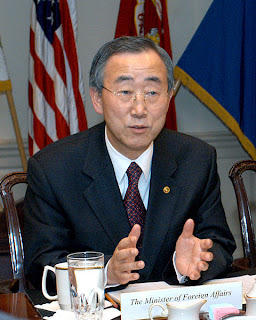 During his press conference on Wednesday, April 17, UN Secretary-General Ban Ki-Moon was asked about 2 terrorist attacks -- the bombing at the Boston Marathon and the rocket attack launched against Israeli civilians.

This is how he responded:


Question: A quick follow-up on this; the Russian Ambassador has dismissed the Arab League as a viable partner in this. Should this mission be separated? Also, my main question, which is: you often remark on terrorist events around the world. Two days in, do you have anything to say about Boston? Also this morning, a rocket attack in Israel.

Secretary-General: I have already issued my statement, immediately after this tragic incident which happened on the occasion of the Boston Marathon. I have strongly condemned such an attack against civilian populations. Many people were wounded, with three people killed. I have conveyed my deepest condolences and sympathies for all those wounded and killed. Now what is important is that I’ve been closely following all of the investigations by the authorities of the United States. I sincerely hope that they will be able to find the perpetrators and bring anybody, whoever may be [guilty], to justice. The United Nations is also strengthening safety and security measures throughout all the United Nations compounds.

We are also trying to strengthen the security measures all throughout the missions around the world. I sincerely hope that the international community should be committed and united in fighting against any such
terrorist attacks.

...Question: And the rockets in Israel?

Secretary-General: Let me just have one question by one person. Thank you very much.

How does one explain Ban Ki-Moon's cold response to a question about the Hamas rockets fired at Israel? Even a boiler plate condemnation was not forthcoming from the lips of the Secretary General.

Yet what would one expect from such a hypocritical organization as the UN that recognized the re-establishment of the state of Israel and now commemorates that day as Nakba, a disaster?

The only disaster is the tool the UN has become in the hands of human rights violators across the world.


Technorati Tag: Israel and UN and Ban Ki-Moon and Terrorism.