Arlene Kushner on Latest in Iran and Syria, As Events There Draw Close To Requiring A Response

No one from the upper military echelon of Israel is whispering in my ear, but the signs seem fairly unmistakable.
Yesterday, Israeli Ambassador to the UN Ron Prosor told the Security Council:


"The Iranian nuclear program continues to advance at the speed of an express train," Prosor said. "The international community's efforts to stop them are moving at the pace of the local train, pausing at every stop for some nations to get off and on."

An apt analogy, I thought.

"The diplomatic channel is not bringing the Iranian nuclear program to a halt and the economic sanctions have yet to stop the centrifuges. A viable military option is required, even if it is the last resort."

I don't know how the signals they are putting out could be much clearer.
If something is going to happen, it will have to be this year -- if not in the next few months.  Iran is edging close to its nuclear goal.
~~~~~~~~~~
What I hasten to point out, again, is that -- minus those 30,000 pound bunker busters that the US will not even consider selling to us (along with means of delivery) -- Israel does not have the capacity to take out Iran's nuclear program in its entirety.
We do, according to the best sources I have, possess the ability to set it back three to five years.  What is more, there are other ways to disable Iran seriously -- ways in which Israel does have the capacity to act.
~~~~~~~~~~
As the time frame is of enormous importance, I continue to wonder if Israel will secure delivery of the new armaments that the US has just agreed to sell us in time for them to be of use in an attack on Iran.  Could be that we'll delay to the last moment, awaiting that delivery, or, conversely that we'll act without that equipment. We are purchasing new re-fueling planes, for example, but already possess re-fueling planes, perhaps not as advanced but perhaps sufficient to the day; just as we already possess the capacity to take down radar, even if we are now being sold a better system of anti-radar missiles.
~~~~~~~~~~
It is, further, the case that some of the equipment we will now purchase from the US is almost certainly intended for action against our neighbors and not far-off Iran.  I have in mind in particular the V-22 Osprey aircraft, which is designed as a troop carrier.  Ground war will be the order of the day, for example, in Lebanon, when we battle Hezbollah, but not in Iran.
~~~~~~~~~~
Syria.  I am watching a diplomatic dance that at one and the same time comes as no surprise to me and yet astounds me.
I wrote two days ago about the fact that the head of IDF Military Intelligence, Research Branch, Brig. Gen. ltay Baron, said that Assad's troops have used lethal chemical weapons.
But the US does not know... Says Secretary of Defense Hagel:

He denied that he was questioning the validity of the intelligence of other countries. Other countries?  Israel.
What was important, insisted Hagel, is that "the United States relies on its own intelligence — and must."
President Obama has said that Assad's use of chemical weapons would be a game changer.  Now he has put out a statement saying that intelligence assessments (even by the US) are not enough. What he wants is "credible and corroborated facts."  This is the Obama -- who has repeatedly shown an extreme reluctance to act -- we've come to know over the last four years.  He'd like to delay "knowing" what's going on there as long as possible.  No need for the US to act hastily, is there?
~~~~~~~~~~
As if matters in Syria are not already bad enough, we have this additional news about Europeans going to fight there (emphasis added):

"Gilles de Kerchove [the EU's anti-terror chief] estimated the number in Syria at about 500.

"Intelligence agencies are concerned some could join groups linked to al-Qaeda and later return to Europe to launch terrorist attacks.

"The UK, Ireland and France are among the EU countries estimated to have the highest numbers of fighters in Syria.

"'Not all of them are radical when they leave, but most likely many of them will be radicalized there, will be trained,' Mr. de Kerchove told the BBC.

"And as we've seen this might lead to a serious threat when they get back."

"In Britain and Belgium they have increased efforts to track how people are recruited.

"In the Netherlands, officials have raised the terror threat level there to "substantial" - partly over concerns about radicalized citizens returning from Syria."

Read: Hundreds of Europeans fighting in Syria, says EU expert
Alarming in any event. But what I find interesting is that there is no mention in this BBC report of the background of the" Europeans" who are going to fight in Syria.
Any one want to take a guess?
~~~~~~~~~~
Oh joy. Oh goody.  There has been talk about this before and now here we have it again:
The US is thinking about convening a Mid-east summit in June in Washington, at which President Obama, PM Netanyahu, purported president Abbas and King Abdullah would participate. Reportedly, Egypt, Turkey and some Arab nations might also be invited to participate.
And -- horror of horrors -- "the Administration is said to be contemplating a letter of invitation or 'terms of reference' for the summit that will include the 2002 Arab Peace Initiative."  That initiative is a plan for Israel's destruction.
The keyword here is "contemplating" -- according to the "well-placed US sources" cited, the decision has not been made: "The Administration...has yet to decide whether it will convene the summit in any case, or only if Kerry achieves a breakthrough that will allow a resumption of peace talks."
Kerry had better watch it or he's going to end up looking like a fool again.  But I suspect that's his default position.
Kerry is much more eager to get "peace talks" going than the president: "Kerry, the source added, is 'working night and day' to get the peace process moving."
Kerry discussed this plan with Abbas and the Turkish and Egyptian foreign ministers when he was in Turkey recently. Obama will be talking to King Abdullah about it tomorrow, when he visits the White House, and Turkish PM Erdogan, when he visits in May.
Important to keep in mind that the source here is Haaretz, which is always delighted to promote a "peace process."
Read: U.S. seeks to convene 4-way Mideast summit in June
~~~~~~~~~~
What we can be certain of is that PA officials will be dragging their feet.  Writes Avi Issacharoff (emphasis added):

“'Forget about plan B, there is no plan B,' a Palestinian official told me during a Sunday visit to Ramallah. 'If you think they [Abbas and the Palestinian leadership] know what to do after Kerry’s attempt to renew the negotiations, you’re wrong.'"

Kerry has now met with Abbas in Istanbul,  Riyadh, Amman, and Ramallah  "None of these meetings yielded noteworthy results."

"Over one thing, one might find a rare consensus in Ramallah: 'The question is not if Kerry fails, but when,' a different Palestinian official told me, in his office. According to him, the secretary of state’s ruse to 'tempt' Abbas back to the negotiating table with economic gestures from Israel is completely misguided."

Read: There’s no Palestinian ‘Plan B,’ just an unrealistic ‘Study 13′
What sort of self-deluded dunce is Kerry (a rhetorical question), that, after four -- four! -- unproductive meetings with Abbas he imagines he might move ahead with negotiations?
~~~~~~~~~~
Closing with very good news -- or as good as it can be given the context:
On Tuesday, Waal al-Arjeh, who had been found guilty of the murder of Asher Palmer and his infant son, Yonatan, was sentenced by the Ofer military court to two life sentences plus 58 years.  From a moving car, Al-Arjeh had hurled  heavy rocks at the windshield of the Palmer car with intent to kill.  Palmer lost control of the car after he was hit by the rocks; he and his baby son died when the car over-turned on an embankment.
This sentence -- a legal victory -- sets a precedent. It is hoped that it will also serve as a deterrent to others contemplating similar terrorism. But nothing brings back those who were killed.
Michael Palmer, father and grandfather of the victims, has had the courage to sit through the entire agonizing and lengthy trial.  After he heard the sentence pronounced, he said, "Today justice was done, This was the hardest year and a half of my life." 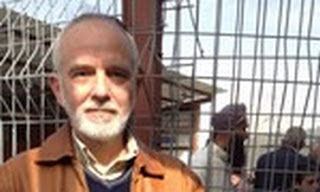 Credit: JOANNA PARASZCZUK
~~~~~~~~~~~
© Arlene Kushner. This material is produced by Arlene Kushner, functioning as an independent journalist. Permission is granted for it to be reproduced only with proper attribution.
If it is reproduced and emphasis is added, the fact that it has been added must be noted.