Last week the editors of the New York Times asked Were Chemical Weapons Used in Syria?


It would be alarming if Mr. Assad crossed a line few others have crossed. Within one minute, nerve agents like sarin can trigger eye pain, nausea and vomiting, loss of bowel function, difficulty breathing and muscle weakness. But the case against Mr. Assad, so far, is thin. Experts say the best way to prove that chemical weapons have been used is to collect soil samples promptly at the site and examine suspected victims. That’s hard to do in a war zone, and, so far, Israel, Britain and France have not offered physical proof (Israeli officials cited only photographs of Syrians “foaming at the mouth.”) Prime Minister Benjamin Netanyahu of Israel told Secretary of State John Kerry on Tuesday that he “was not in a position to confirm” his own government’s intelligence assessment.

Given such mixed messages, Mr. Kerry and other administration officials have said, that while sharing some of the suspicions of America’s allies, they simply don’t have the facts to make a judgment, much less fashion a policy response. 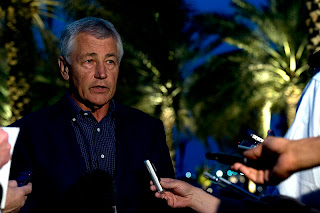 The certainty of that last sentence is based on assumption that everything intelligence agencies and those at the highest level of government is what they've made public.

However, in the Jerusalem Post, Michael Wilner explained why this assumption is not necessarily correct.


Western intelligence officials therefore fear that an extensive, detailed report of findings would reveal their hand to the Assad government, possibly compromising agents or allies on the ground who were able to acquire evidence quickly.

Despite the certainty of the editors, the reporting at the New York Times has shown a little equivocation.
An article datelined April 25, U.S. Sees No Conclusive Evidence of Chemical Arms Use by Syria, included an interesting disclaimer.


Editor’s Note: This article, which appeared in Thursday’s print editions of The Times, has been republished for archiving purposes. The latest article on Syria and chemical weapons can be foundhere.

News is constantly changing as we learn more and more, why was there a need for this notice. The earlier article reported:


Faced with mounting pressure to act against Syria — including a new [assertion] by an Israeli military intelligence official on Tuesday that Syria repeatedly used chemical weapons — the United States is waiting for the results of an exhaustive analysis of soil, hair, and other material to determine whether chemical warfare agents haved been used.

Even if that investigation proves the use of chemicals, this official said, the White House must determine who used them and whether they were used deliberately or accidentally. He did not offer a timetable for that process.

“It is precisely because this is a red line that we have to establish with airtight certainty that this happened,” said the official, who spoke on condition of anonymity so he could discuss internal deliberations. “The bar on the United States is higher than on anyone else, both because of our capabilities and because of our history in Iraq.”


“Every intelligence branch can submit its own assessment,” said an Israeli official, who spoke on condition of anonymity. “The issue of chemical weapons is being examined by Israel and the United States at the most senior levels, and is still being discussed.”

Another official said that was the reason that Prime Minister Benjamin Netanyahu told Secretary of State John Kerry on Tuesday that he could not confirm the assessment.

“There’s a difference between what the I.D.F. feels is the truth as they see it and what we feel is appropriate for the dialogue between the two governments,” he said, referring to the Israel Defense Forces. “Don’t read into this an effort to force America’s hand.”


The White House said Thursday that it believes the Syrian government has used chemical weapons in its civil war, an assessment that could test President Obama’s repeated warnings that such an attack could precipitate American intervention in Syria.

The White House, in a letter to Congressional leaders, said the nation’s intelligence agencies assessed “with varying degrees of confidence” that the government of President Bashar al-Assad had used the chemical agent sarin on a small scale.

But it said more conclusive evidence was needed before Mr. Obama would take action, referring obliquely to both the Bush administration’s use of faulty intelligence in the march to war in Iraq and the ramifications of any decision to enter another conflict in the Middle East.

The later article included Eric Schmitt's byline (in addition to Mark Landler, the White House correspondent). Schmitt covers national security issues. This suggests that Schmitt learned something about the proofs that was unavailable in the first report. However that doesn't explain the editor's note, which is telling readers to ignore the earlier story.

I could speculate that the Times has learned some details of the proof of the Syrian government's use of chemical weapons and the editors want to make sure that the administration isn't looking foolish for refusing to acknowledge it. But acknowledging it an acting upon it are two separate things.


The Optimistic Conservative writes in Just a reminder: Military readiness affects the viability of Syria operations too:


After U.S. officials agreed last week that the Assad regime has used chemical weapons on its people, politicians and pundits resumed making the case for a U.S. intervention in Syria. And they speak as if the budget cuts affecting the Air Force and Navy won’t affect our ability to launch operations overseas. Their heads apparently aren’t around that reality yet.

Senator John McCain (R-AZ) suggested that enforcing a no-fly zone could be required. He expressed concern that the administration would maneuver to delay action – and he is no doubt right. Charles Krauthammer pointed out on Fox News’s Special Report that the president’s credibility is on the line, given his clear identification of chemical weapons use as a “red line” for the U.S. on the Syria crisis. But no one mentioned the core limitation of military readiness.

You may or may not think it’s advisable for the U.S. to intervene in Syria, even with an operation of minimal scope. But it should all be pretty close to moot, because the Air Force standdown means that we just don’t have that many combat-ready strike-fighter squadrons to put on the problem.

There is no Navy aircraft carrier in the Mediterranean either, and there is only one in the Persian Gulf. While it is possible to deploy the USS Harry S Truman (CVN-75) Strike Group from the East coast, where it lingers in a non-deployed Twilight Zone, the Navy would have to ask for more operating funds to do it.

2) Droning on
Late last week a drone from Lebanon was shot down near Haifa.


An unmanned aerial vehicle (UAV) attempted to violate Israeli airspace from the north at approximately 2 p.m. this afternoon. The UAV was tracked by IDF ground and aerial surveillance for the duration of its flight path as it attempted to approach Israel’s coast.

Israel Air Force aircraft intercepted the UAV and successfully downed the target five nautical miles off the coast of the northern Israeli city of Haifa. IDF naval forces are currently searching the area.


An unmanned aerial vehicle (UAV) attempted to violate Israeli airspace from the north at approximately 2 p.m. this afternoon. The UAV was tracked by IDF ground and aerial surveillance for the duration of its flight path as it attempted to approach Israel’s coast.


Assessments that Iran is behind the launch of the unmanned drone into Israel airspace Thursday is gaining popularity among Israel's senior military and political echelons.

According to current assessments, the drone, which was downed by an IAF F-16 jet a few kilometers west of Haifa's shore line, was sent by the Iranian Revolutionary Guard, in contradiction to previous assessments that Hezbollah was behind the launch.

But it might just be a distinction without much of a difference.


The Iranian forces, it is believed, are active on Lebanese soil in an attempt to assist Assad's Syrian regime as well as Hezbollah, and according to assessments they are charged with developing Hezbollah's drone capabilities, both in terms of hardware and know-how.


Tashbih Sayyed: Israel is vital for the stability of the region muslimworldtoday.com/land30.htm
— Aharon Meytahl (@ameytahl) April 28, 2013

Here's a brief excerpt from A Muslim In A Jewish Land:


As the El Al approached the Promised Land, I continued to shuffle the list of charges made routinely against Israel by its enemies. Israelis live in a perpetual state of fear.
Israel is undemocratic.

Muslim Arab citizens of Israel do not have equal rights
Israelis live in a perpetual state of fear:

From Tel Aviv to Tiberias, Jerusalem to Jezreel, and from Golan heights to the Gaza border, I could not find any evidence of fear. In fact the people felt so secure that none of the stores, gas stations, market places, or residences we went to, and where it was known that we were Muslims, deemed it necessary to either search or interrogate us. Especially when Kiran and I went to the Ben Yahuda Street in Jerusalem on a Friday evening, we found it bursting at its seams with people of all ages. The ground was shaking with music and young boys and girls were so busy having fun that they did not bother to even look around. Tourists were busy making deals and the whole crowd seemed to throb with the beat of the music.

I could not help but compare Israel's sense of security with the environment of insecurity that exists in Muslim countries. From Indonesia to Iran and from Afghanistan to Saudi Arabia, people are not sure of anything. In Pakistan's capital Islamabad, and the port city of Karachi, I was constantly advised not to make big purchases publicly for it encourages robbers to come after you. I did not hear news of any rape, honor killing or hold-up in Israel.


Technorati Tag: Israel and Syria and Iran and Drones.