Let's Hear It For Saudi Arabia!

Saudi Arabia is one of the most pro-American countries in the Muslim world.

Must be true--that's the title of the Terror Free Tomorrow survey [available here]:

(The Saudi Arabians in Iraq must be the ones who are not the most pro-American...)

According to the introduction to the Saudi survey, Saudi Arabians are great fans of the US:

Saudi Arabia is the birthplace of Islam and home to its holiest places. It is also the home country of Osama Bin Laden and 15 of the 19 9/11 terrorists.

The people of Saudi Arabia are now among the most pro-American and anti-terrorist of any in the entire Muslim world.

These are just some of the findings of an unprecedented and uncensored nationwide public opinion survey in the Kingdom of Saudi Arabia. The survey was conducted by phone from November 30 to December 5, 2007 by Terror Free Tomorrow: The Center for Public Opinion and D3 Systems.

It's Israel that Saudi Arabia has trouble with: 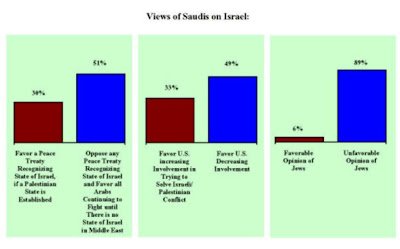 51% of Saudi Arabians "oppose any peace treaty recognizing State of Israel and favor all Arabs continuing to fight until there is no State of Israel in the Middle East"--supposedly supporting Palestinian terrorists too. This is not surprising, coming from a racist apartheid state that demanded at Annapolis that Israeli government officials enter through the servants' entrance.

89% of Saudi Arabians have "an unfavorable opinion of Jews"--if you can judge people by the company they keep, what exactly does this say about the US?

Allahpundit sheds some light on the Saudi change of heart:

Thanks in part to the great majority of 9/11 hijackers having come from the Kingdom as well as its unique religious status within Islam, I’ve always operated under the assumption that the Saudis were the most radically anti-American population in the Middle East. Not remotely true, as it turns out, although it would have been close to the truth last year, when our approval rating was only 11%. What accounts for the big gain? Fear of Iran, I’m guessing, as well as improvements in Anbar.

Fear is a great motivator.