Based on a psychological study of why people tend to support the underdog, by The Personality and Social Psychology Bulletin, it may be that the way to improve Israel's image is not to emphasize her contributions to science, nor even to advertise the beaches filled with bikini-clad women. In a study, The Appeal of the Underdog (PDF), researchers from the University of South Florida found something more basic--and used the Israel-Palestine conflict as one of its test cases.

STUDY 2: ATTITUDES ABOUT THE ISRAELI–PALESTINIAN CONFLICT

The international political arena provides another context in which disparities in power or resources, and differing expectations for success, can shape public opinion about various groups. The ongoing conflict in the Middle East between Israelis and Palestinians is one salient example. If people are drawn to sympathize with figures seen as underdogs, attitudes about the parties in this conflict might be strategically shaped by emphasizing the underdog status of one group over the other. The Israeli–Palestinian conflict provides an interesting test of this hypothesis because either side could conceivably be seen as an underdog. On one hand, Israelis are surrounded by Arab countries who are generally hostile to their presence, and anti-Jewish sentiment runs high in the region. On the other hand, after the creation of the state of Israel in 1948, Palestinians lost their homes and were relegated to live largely under Israeli occupation, where the standard of living is much lower than among Israelis generally.

Another way to frame Israel as the underdog is to emphasize the terrorist attacks launched against ordinary citizens by Hamas, Fatah, and Hizbollah--but let's not get ahead of ourselves.

In this study, we examined whether support for Israelis and Palestinians could be shaped by manipulating who was perceived to be the underdog. Here we operationalized underdog status by subtly reinforcing physical size disparities through maps that shifted the perspective to make salient Israel as large, surrounding the smaller occupied Palestinian territories, or conversely, by making Israel appear small by showing it surrounded by the Arab countries of the greater Middle East. We predicted that this shift in visual perspective would create perceptions of underdog status, which would in turn predict support for the underdog side.

Here is the map they used: 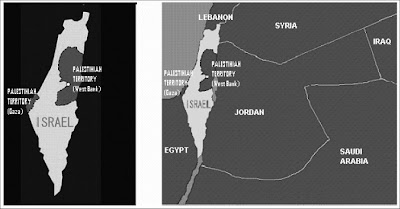 One of the interesting tangential points made in the study is that the Participants in the study said they were anywhere from "not very" to "somewhat" familiar with the Israeli–Palestinian conflict before being given a one-page essay to read for background. That would seem to indicate that there are still people out there who do not follow the news out of Israel closely. By the same token, polls in the US do indicate strong feelings for Israel over the Palestinian Arabs.

According to the results of this part of the study:

So according to the study:

When Israel was portrayed as small on the map:
o 62.1% saw Israel as the underdog
o But 76.7% were more supportive of Israel
o There was more sympathy towards Israel (4.00 vs. 3.30)--especially compared to Palestinians when they were perceived as the underdog.

Apparently being the underdog isn't everything--terrorism and corruption does seem to take a toll. The study also concluded that opinions about Israel and the Palestinians were "malleable," which may mean that the damage done by Israel's lackluster attempt at Hasbarah may not be permanent.

o "...In Study 2 we did find some evidence that framing Israel or the Palestinian territories as an underdog (through a visual perspective manipulation) led to great support relative to a control, but framing either as the dominant group did not lessen support, suggesting underdog sympathy was a stronger motivation than schadenfreude."

If is not Israel's dominant position vis-a-vis the Palestinians per se that seem to be what makes the Palestinians the underdog, then there is no need for Israel to try to present itself as weaker than perceived--a hopeless maneuver that would be sure to backfire in any case. The key is to present clearly and consistently what Palestinian terrorists are doing and saying--both to Israel and to each other. If a military surge in Iraq could change the way the media now presents the war in Iraq, perhaps a PR surge could create enough of a shift in popular perception that the media would take note.

A project like this is too important to be left to Israel's leaders.

Crossposted on Soccer Dad and Israpundit

Email ThisBlogThis!Share to TwitterShare to FacebookShare to Pinterest
Labels: Hasbarah

It never fails to amaze me how Israeli PR is presented by out enemies and how poor it really looks. But it is a useless aside, I realize this.

"and how poor it really looks"

This line is hilarious: "That would seem to indicate that there are still people out there who do not follow the news out of Israel closely"

They seem to believe that if you follow the news you would have any idea of what is going on here.

Anyway,all we need to do is to tell the truth - this is our country, and stop accepting blame and responsibility for everything. But then, we're Jews. I guess this strategy is too straight forward to actually work.

But it's hard to keep saying the truth when the lies are said so much louder and told more often.

Being that we are the minority, the truth just gets drowned out...many just give up.